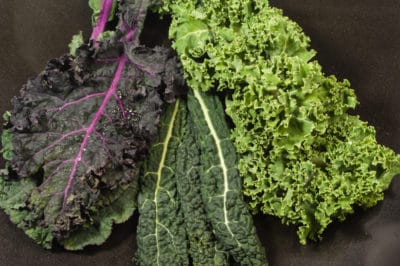 Kale does come in so many varieties, and in flavor variations as well, that choosing among them may seem overwhelming. You may think that the different kinds of kale grown as a vegetable are distinct from ornamental kale, but they aren’t. Kale varieties are differentiated mainly by color, flavor, growing height, and leaf type – curly or bumpy, for example.

Kale in the Flower Garden

Japanese horticulturists developed many of the ornamental kales. The varieties include:

Just as cold weather sweetens the taste of kale that is grown as a vegetable, it also intensifies the colors of ornamental kale.

Kale in the Vegetable Garden

Leaf colors include dark greens to light greens and violet-brown to violet-green. The center rosettes of ornamental kale varieties can be blue, violet, lavender, pink, white, or red.

Dwarf varieties of kale, such as Dwarf Blue Curled, may only be 12 inches high. Most varieties grow to be 2-3 feet tall. However, varieties like walking stick kale, which is also called tree kale, can grow as tall as 6-10 feet.

If you are growing your kale to eat, appearances count in judging the attractiveness of the dish and its “plating”, as they say on the Food Network, but what matters to most people is the taste.

The kales with red or purple leaves and curly-leaf kales; such as Scots Kale, Blue Curled Kale, and others with similar names; share a sweet flavor tinged by an added pepperiness with an assertive, pungent, slightly bitter edge. White kale shares this flavor, as well.

If you have a recipe that calls for kale without specifying a variety, though, these kales offer the sought after blend of flavors. Simply choose the one that gives your dish the most attractive look for the occasion.

If you want to use these varieties of kale in a salad, pick the leaves as baby kale, before they reach the size of your hand, when the flavor is milder. Save the larger leaves for soups, stews, and other cooked dishes. You can also use them as substitutes for spinach or cabbage to add variety to the flavor of your favorite dishes.

Lacinato kale has a sweet or nutty sweet flavor that is milder than red, purple, white, or curly-leaf kales. It also lacks, or at least has less of, the bitter edge to its flavor. This is the variety to sauté or to serve raw in salads.

Opinions differ on Red Russian Kale. Some feel that, although it adds a touch of pepperiness to kale’s generally sweet flavor, it is milder than white, purple, and curly-leafed kales. Others feel that the pepperiness places its flavor in the same taste category, even if it might be milder. How you decide to use Red Russian Kale is up to you and your family’s taste preferences.

Kale as a Seasoning All Year Long

If you would like to have kale around to season dishes all year long, you can. Dry the leaves in your oven or in a dehydrator to preserve it for long-term use.