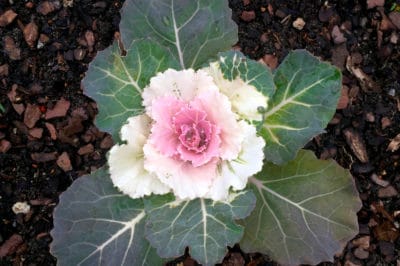 Kale can seem like the confused vegetable in the plant world. It can last and grow healthy for several years, however, most gardeners wanting to harvest it for eating won't want to let it linger in the garden for this long.

Defining the Confusion of Kale’s Growth

To straighten out the confusion over whether kale is an annual or biennial, let’s start with the definitions.

How Kale Is Usually Grown as an Annual

Kale is usually grown as if it were an annual. Because kale’s leaves become tough and bitter when summer temperatures heat up above 80°F (27°C), kale is most often planted in the early spring for early summer harvests or in late summer for fall harvests.

Kale can survive frosts, and the colder weather can make kale’s taste even sweeter. When the first killing freeze occurs, though, kale leaves die off above the ground. Most gardener’s pull their kale up after that killing freeze.

Why Kale Is Actually a Biennial

Kale’s roots are like grass roots. After that killing freeze, the roots merely go dormant. If they are left in the ground, new kale leaves will sprout when temperatures begin to warm again. Some gardeners will leave kale’s roots to overwinter in the ground in the hope of a few early spring harvests before their newly planted kale matures.

Those gardeners who pull up their kale after the first freeze do have a good reason for doing so. When the warmer temperatures that revive kale’s roots return, kale will have reached maturity. It will be ready to bolt, to produce flowers and seeds before dying off at the end of it’s actual two-year, biennial life cycle.

Signs That Kale Is Preparing to Bolt

What Happens When Kale Bolts

As kale prepares to bolt, the leaves become much tougher and much more bitter. If spring temperatures warm up too quickly, kale can bolt before there is any chance of any early harvests. In addition, if a period of warm weather occurs in the middle of the winter, kale, like other plants, can be tricked into reviving only to be killed off when winter temperatures return.

Some who uproot their kale after a killing freeze may not know that their kale could revive with the return of warm weather, but those who do know may decide that they may just as well plant fresh as give space to plants that may bolt before any kale can be harvested.

If you do decide to let your kale overwinter in the ground and it does bolt, you do have the opportunity to wait until the seed pods ripen and dry out to harvest your own kale seeds. After the pods dry out, snap them off of the plants and cut them open to remove the seeds, but remember how small kale seeds are and take care not to lose any.