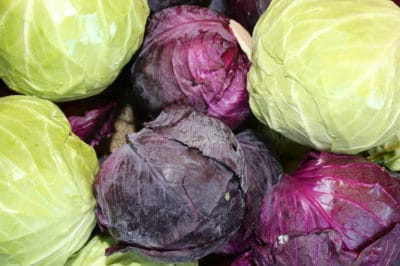 The cole family -- cabbage, kale, collards, Brussels sprouts, and cauliflower – is also known by the scientific name, Brassica oleracea, and descends from a common wild ancestor that still exists. The original Brassica oleracea grew along the British and French coasts and around the Mediterranean Sea. Growers sought more leaves and then more tightly bunched leaves, leading first to kale and then to cabbage.

The original Brassica oleracea is described as either a wild mustard or a wild cabbage. As a coastal plant, it tolerates salt from salt water, but it does not compete well against other plants that invade its territory. That isolates it to growing on cool, damp, rocky cliffs. Like succulents, it relies on thickish leaves to retain nutrients and water.

The Greeks and Romans

The Greeks had domesticated Brassica oleracea by the fourth century BC and had developed three varieties – one with flat leaves, one with curly leaves, and a loose-leafed cabbage. Both the Greeks and Romans sought to increase the size of their harvests by saving the seeds of the plants that produced the most leaves. Attempts to increase the number of leaves per plant may have led to tighter clusters of leaves and then to headed cabbages. The Greeks referred to headed cabbages as krambe while the Romans called them olus or brasssica, hence our scientific name.

Cabbage was eaten and used for medicinal purposes in both ancient Greece and Rome. The Greeks believed that cabbage was harmful to grapevines and would spread its odor to the grapes. From that belief, they came to regard cabbage as an anecdote to drunkenness.

The Middle Ages, Charlemagne, and the Renaissance

Cabbage and kale were common vegetables in the Middle Ages. They are included in images contained in illuminated manuscripts, and a document with instructions for managing the royal estates of Charlemagne, the Capitulare de villis, includes cabbage among the vegetables that were to be grown.

While the Anglo-Saxons who settled in Britain grew a cabbage they referred to as cawel, round-headed cabbages didn’t appear there until the 14th century.

A number of cabbage varieties were created in the Low Countries of Europe as well as Germany and France. For example, Savoy cabbage was developed by German farmers in the 16th century. Through the 17th and 18th century, cabbage was a diet basic in such countries as:

Pickled cabbage was a common dish, and German, Dutch, and Scandinavian explorers took sauerkraut with them on their long voyages to help prevent scurvy.

The New World and Beyond

Trade routes carried cabbage from Europe to Egypt, Mesopotamia, and Asia. Portuguese traders introduced cabbage to India from the 14th to 17th century.

Cabbage was introduced to the Americas by Jacque Cartier between 1541 and 1542, and both the native American Indians and the colonists were growing it by the 18th century. The First Fleet carried cabbage seeds to Australia in 1788.

Carl Linnaeus briefly split the family in the 18th century when he reclassified the oilseed-producing members, such as Napa cabbage, as belonging to a different species and renamed them Brassica rapa. Scientists in the 20th century discovered that members of the Brassica rapa and the Brassica oleracea clans could cross fertilize each other, however, meaning that they were one species after all.

Cabbage was still unknown in Japan in 1775, but since then, the Japanese have come to know cabbage so well that they developed many of the ornamental cabbages.