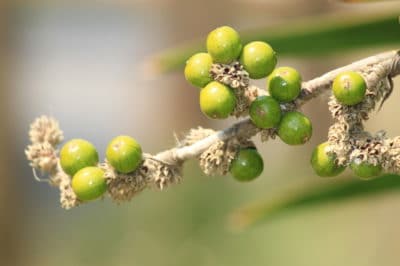 When Do Fig Trees Bloom?

Figs are an unusual fruit in several ways. They must ripen on the tree, some require a specific wasp for pollination and the flowers are inside the fruit. Although they do bloom, the flowers are insignificant and you won't actually see them as you do those of most fruit trees.

The fig tree generally grows best in areas where the climate is similar to the Mediterranean, USDA Zones 7 to 10. In the right conditions, the tree may grow 30 feet tall, but most growers prune to 12 feet or less. Figs tolerate most soils, including acid soils. Regular watering is required for good fruit production. Fertilizer is not usually required but may increase the fruit crop.

The blossom of a fig is actually the fruit itself – what we call fruit is an inverted blossom. Figs have what is known as a synconium, a hollow fleshy structure in which the flowers develop. Once pollinated, the fruit and seeds develop inside the synconium, which swells to provide room for the developing fruit. Some figs are self-pollinating, but the principle is the same.

Like most fruit trees, figs bloom in spring. Varieties bloom at different times:

Some fig varieties – most of those that are grown commercially – produce only female flowers and don’t need a pollinator. Others produce both male and female flowers. These varieties are pollinated by tiny wasps. Females lay their eggs in the male figs, which we don’t eat. When female wasps enter a female fig, they pollinate the blossoms inside.

Immaturity is one of the most common reasons fig trees don’t bloom – most varieties take five or six years to mature. Late frosts and hot dry conditions can affect both blooming and fruit set. Trees that don’t receive enough water or are grown in very poor soil may produce few blooms. Heavy pruning can reduce the amount of wood available to produce blossoms.