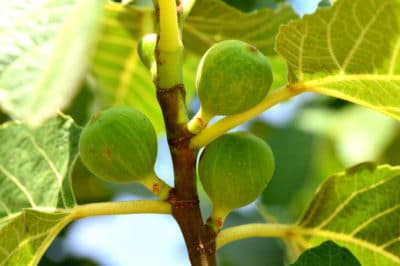 How to Care for a Fig Tree

Possibly the oldest of the domesticated fruits, the fig tree has been cultivated for over 5,000 years. The unique foliage is strikingly attractive and the tree will often produce fruit within two years of planting. Fig trees can be grown in the ground or containers and have fairly simple care requirements.

Where Do Figs Grow?

Figs originated in the Mediterranean and most prefer similar climates. Most varieties of fig will grow well in USDA Zones 8 and up, although the roots will survive in Zones 6 and 7. A few varieties can be grown in Zone 5. In the US, figs are grown commercially in California, Oregon, Texas, Utah and Washington. World-wide, the top fig growing counties are Turkey, Egypt, Morocco and Iran.

Are There Different Kinds of Figs?

All figs fall into one of four groups:

What Fig Varieties Are Available?

More than 600 named varieties of fig exist. Mission is one of the most common commercial varieties, but these are good choices for the home gardener:

Can I Grow Figs in Containers?

Figs can be grown in containers, although a mature fig tree has considerable size and weight. It may need a pot as much as two or three feet in diameter – the size of a half barrel – and will probably need to be pruned to keep it from outgrowing the pot. Figs in containers need well-drained soil and in most cases, full sun.

Can I Grow Figs Indoors?

A number of ornamental fig varieties can be grown indoors. If you want fruit, however, a variety like Brown Turkey – also called Negro Largo – is the best choice. It’s relatively small and can be pruned easily. It should have bright indirect light, like a northern exposure or a window with a translucent shade. Keep it in a warm room and prevent cold drafts.

What Soil do Figs Need?

Figs do well in almost any kind of soil as long as it drains well. You can use commercial potting soil for containers but it’s best to amend it with some coarse sand. Figs prefer a pH between 6.0 and 6.5, but will also manage in more acidic soils. In the garden, either add amendments to promote drainage or plant in a raised bed.

How Do I Water Figs?

The Mediterranean is typically dry in summer and has relatively low rainfall. Over-watering is more of a risk with figs than is too little water, but fruit production may be affected if the tree is under-watered. A deep soaking once a week is usually sufficient. Figs in containers may need to be watered more often, but don’t let water stand around the roots.

How do I Fertilize Figs?

When grown in soil of average fertility, fig trees don’t usually need fertilizer. In fact, fertilizing the tree can lead to split branches and decreased fruit production. If you have very poor, sandy soil, it’s usually better to amend the soil with well-rotted leaf mold, aged manure or organic compost. Figs grown in containers may need occasional balanced fertilizer with an NPK ratio of 8-8-8 or 10-10-10.

Do Fig Trees Need a Pollinator?

Most fig trees are self-fertile and do not need a pollinator tree. However, many are actually pollinated with their own pollen by tiny wasps. The flowers are enclosed inside a structure called the inflorescence and the wasps enter through a tiny hole to pollinate the fruit. Persistent or common figs don’t need a pollinator, while caducous and intermediate figs require a pollinator.

Why Do Fig Fruits Have That Unusual Shape?

The fig fruit is actually a collection of tiny flowers inside a bulbous structure that has only a tiny opening – or in some cases, no opening. Several hundred tiny flowers are jammed together inside the fruit skin.The flowers never see daylight and are absorbed into the fruit as it develops.

Nematodes are one of the most common fig pests – plant marigolds at the base of the tree to deter these underground pests. Various beetles attack the fruit or suck the sap. Traps are often the only organic method of control. For borers, enclose the bottom trunk in foil covered with netting – spread Vaseline on the foil to prevent females from laying eggs in the bark. Good sanitation helps prevent serious damage.

How Do I Protect My Figs From Birds?

Birds love figs, and since the fruit must ripen on the trees, you’ll need to protect it for a good harvest. Covering trees with a net is most successful. Flashing lights, strips of reflective foil and similar strategies usually only work temporarily as the birds become used to them. Keeping the tree pruned to about eight feet makes it easier to net the plant and pick the figs.

What Diseases Can Figs Develop?

Fungal and viral diseases are the most common problems in fig trees. They may be spread by insects and are often worse in wet years or humid areas. They include anthracnose, fig rust, fig mosaic, endosepsis, aspergillosis and canker. Prune and burn diseased branches and leaves. Don’t put diseased fruit in the compost pile. Over-watering can cause root rot. Choose disease-resistant varieties when possible.

Should I Prune My Fig Tree?

Unlike some other fruit tress, figs don’t require annual pruning. However, you may want to prune for shape, especially if you are growing the tree as a single specimen plant. Keeping the tree around eight feet or less also makes it easier to pick fruit and protect the trees with netting. Figs should be pruned during the dormant season, in winter.

Do Figs Need to Be Thinned?

In most cases, a fig tree will naturally thin itself by dropping excess fruits. However, if you have a particularly heavy crop and the branches may break under the weight, you can thin the fruit. Cut – don’t break or tear – the stems with a sharp pair of pruning shears. It’s better to cut close to the fruit. If thinning more than one tree, clean your tools with dilute bleach between trees to prevent spreading disease.

How Are Figs Propagated?

Figs can be grown from seed – and seeds are often spread by birds and animals – but they won’t be identical to the parent plant. Most figs are propagated by stem cuttings. The will grow best when hardwood cuttings are taken in the winter, but can also be propagated from summer softwood cuttings. It takes a full growing season for cuttings to grow. Fruit production usually takes about five years.

When Should I Harvest Figs?

Figs are one of the fruits that must ripen on the tree. Initially, most fruits will be green and the stem is stiff. As the fruit ripens, it will change color to brown, deep purple or almost black. However, some varieties remain green and simply become darker. The stem will begin to bend until the fruit droops from the branches. The fruit also becomes softer as it ripens.

What Are Figs Used For?

Humans have been eating figs for as much as 9,000 years. The ripe fruit does not travel or keep well, so the fruit is usually eaten fresh or processed into jam. Figs do dry well, however, and once dry will keep for long periods. Both fruit and leaves also have a long tradition of use in folk medicine. Extracts from figs are used in medications, cosmetics and cleansing products.

How Long do Fig Trees Live?

Fig trees are long-lived compared to many other fruit trees. Life spans of several hundred years are not unusual. The strangler fig, a Florida native, may live more than 1,000 years. The tree gradually spreads from a single rootstock, so what looks like a grove is actually one plant. However, figs generally produce good fruit crops for only about 15 years even if they live much longer.