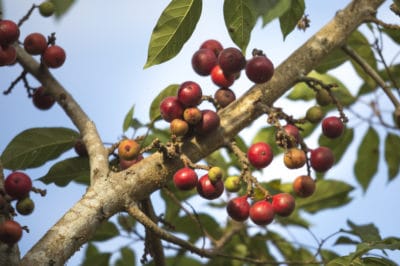 When Are Figs in Season?

Unlike some fruits that are available in grocery stores all year round, figs have a distinct season. Actually, they have two seasons, as many bear two crops. Different varieties are also available at different times of the year. The fresh fruits don't store well and they will split if handled roughly during shipping.

Where do Figs Grow?

The fig is native to the Mediterranean and will grow well in similar mild, semi-arid climates. Commercial figs are produced primarily in Turkey, Morocco, Iran and Egypt, but are also grown in Chile, New Zealand, Spain and Algeria. In the US, most figs are produced in states like California and Texas, although they are also grown in Utah and Oregon.

What USDA Zones are Best for Figs?

Figs generally don’t tolerate temperatures below 20°F (°C) – the tree may survive but is unlikely to produce fruit. However, varieties vary in terms of hardiness. The overall range for figs is USDA Zones 5 through 9. Gardeners in warmer regions will have better luck, but those in colder areas can often grow figs in containers that are moved indoors for the winter.

How Can I Grow Figs?

If you have the right climate, fig trees are not fussy about growing conditions. They prefer a soil pH of 6.0 to 6.5 but can also tolerate more acidic soil. They will grown well in average garden soil and don’t usually need much in the way of fertilizer – compost or organic mulch is sufficient. They need regular, deep watering about once week and should not be over-watered to prevent root rot.

Can I Grow Figs in Containers?

Figs can be grown in containers if you choose the right variety. Either select a smaller tree or prune to keep it below six feet. The container should be about the size of a half barrel to allow enough room for the roots. Make sure the container has adequate drainage holes and use soil that drains well. Place the container in bright, indirect light rather than full sun.

What Varieties of Fig Are Available?

The most common commercial fig varieties include the following:

Do Figs Have Two Seasons?

Which Fig Variety has the Longest Season?

Growing conditions and climate can affect fig season, but some varieties do tend to produce over a longer period. Home gardeners may be able to pick over a longer period as they are not tied to market demands. Brown Turkey and Black Mission are the varieties with the longest season in most cases, followed by Sierra, Kadota and Calimyrna. Tiger has the shortest season.

When Are Imported Figs Available?

Imported figs may come from countries that have the same season as the US or from countries below the equator. Figs imported from areas like Turkey, Spain, Algeria and Morocco will have seasons similar to those in the US – roughly late spring and early summer to fall. Fresh figs available in markets after December are usually imported from Chile, New Zealand and other countries below the equator.

How Can I Extend the Fig Season?

The best way to extend the season is to grow different varieties. If you grow Brown Turkey and Mission, for example, you can have fresh figs from mid-May through December. In some climates, figs will bear nearly year round, but those climates tend to be in tropical areas. Fig trees also tend to have a slightly longer season and bear more heavily as they grow older.

How Can I Ripen Figs More Quickly?

In ideal conditions, figs can ripen in as little as two months. However, any kind of stress slows ripening. Make sure your tree has adequate water, as drought delays ripening. Protect the tree from insects and diseases, which also cause stress. If you have very poor soil, either amend it before planting or use a balanced 8-8-8 or 10-10-10 organic fertilizer.

How Can I Protect Ripening Figs?

Birds are the worst problem you are likely to have as the figs ripen, although insects like figeater beetles are also attracted to the sweet fruit. Nets are the most effective way to deal with marauding birds. Prune the tree relatively low – six to eight feet – to make it easier to spread nets. Hand picking and good garden sanitation are the best way to deal with beetles.

Figs must ripen on the tree and are highly perishable. Pick when the fig is fully colored, feels plump and is slightly soft but not mushy. Store at room temperature in a single layer for several days. They can also be refrigerated for two to three days. Although they will become softer when stored, they will not ripen further, so don’t pick when unripe.

Can Fresh Figs be Canned?

Canning is a good choice for preserving fresh figs. You can use a light or heavy syrup, can them with stevia (not aspartame) or even plain water. Lemon juice or citric acid are used to increase acidity and preserve color. The fruit need not be peeled and is usually canned whole in pint or quart jars. Use tested recipes and follow directions exactly.

Can I Dry Fresh Figs?

In climates where figs are produced commercially, they are typically allowed to begin drying on the tree. You can sun dry your own figs – just wash, cut in half lengthwise and place on well-ventilated racks in full sun. Cover with netting to protect from insects. Turn daily. You can also dry in a dehydrator or an oven on low setting. Store in airtight containers in a cool, dry place.

Can I Freeze Fresh Figs?

Freezing is probably the easiest way to preserve fresh figs. Wash thoroughly and arrange whole ripe figs on a tray. When frozen, package in plastic bags. The fruit will usually keep for about three months. You can also slice or quarter the fruit and freeze in a sugar syrup. Figs frozen in syrup will last longer than those frozen whole.