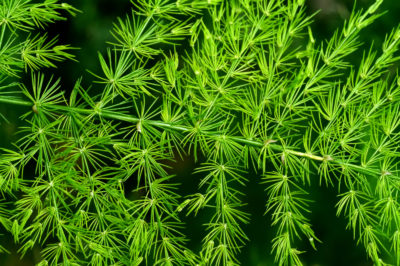 Caring for the Ferny Foliage of Asparagus Plants

The vegetable asparagus is not a true fern, but people refer to the full-grown plant as a fern because of its small, delicate, fern-like leaves. Asparagus plants are either male or female, and the mature fern of the female produces attractive, bright-red seed pods but smaller spears.

Caring for the Ferny Stalks of Mature Asparagus

The highlight of an asparagus bed is the yearly, springtime appearance of tender shoots for eating. But some of these spears turn into the full-grown plant covered with densely-leaved, slender branches of fern-like foliage. Some people use this dense, seasonal foliage as a landscape planting while also harvesting spears for eating.

When ferns are at their fullest is the time when asparagus plants need the most water. Asparagus ferns are usually at their peak of growth in July and August, so regularly water the plants to a depth of 2 feet (.6 meters) during these months, so that the large roots store up energy and nutrients for the next year’s growth of spears.

After August, irrigating can be harmful to the plant as it causes fern development later into the cold season, depleting the root system of nutrients. Stop irrigation at the end of August and let the ferns die back and the roots go dormant. Cut the ferns off at ground level when they turn completely brown, and mulch the bed for winter.

Rust diseases cause asparagus ferns to develop brown spots on foliage and branches. Rust is more common in coastal areas and can be prevented by planting resistant cultivars.

Both male and female asparagus plants produce flowers, and looking closely at the flowers you can determine which plants are male and which female. Male flowers are more elongated and larger in size. Male flowers have six stamens and females have one larger, three-lobed stamen. Only the female plants have flowers which turn into berry-like seed pods.

Because they expend significant energy producing seeds, female asparagus plants do not do as good a job of producing harvestable shoots as male plants. Male plants produce thicker, higher-quality spears which are preferred by most asparagus lovers.

The seeds dropped by female plants also sprout in the asparagus bed, creating an abundance of seedlings which have to be weeded out. So overall, female asparagus plants are less desirable than male plants as a vegetable crop.

Many of the commercially available varieties of asparagus crowns are new, all-male, or predominantly male, hybrids. producing large crops of succulent spears. These varieties include:

Newer asparagus hybrids are also more tolerant of cold weather and have greater resistance to fusarium wilt and rust.