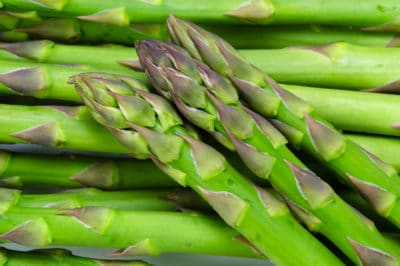 Asparagus spears are ready for picking from early spring through the end of June. Start picking the spears in the third year after planting crowns, but let them grow in the first and second years, because the ferns provide energy to the developing root system.

The shoots are the first part of the asparagus plant to emerge in the spring. When left to grow, the shoot turns into a tall, male or female, many-branched fern with an above-ground life of one season.

Wait until the plants grow for two years for crowns and three years for plants grown from seed before you start harvesting shoots. Otherwise, you deprive the roots of energy provided by the leaves, and the plant may die or produce poorly.

Starting in the third or fourth year, wait until the growing shoots are between 6 and 10 inches (15 and 25cm) tall with still tightly closed buds at the tip. Cut or break the spear off at the soil line, taking care not to damage the crown roots below.

Always let some shoots grow and mature into ferns. After the ferns die back in fall, cut down the stems, fertilize, and mulch the bed for next year’s shoots.

How to Store Fresh Asparagus

Store asparagus by placing the cut end of a bunch of spears in 1 inch (2.5cm) of water in a glass jar or plastic bag and setting it upright in the refrigerator with a plastic bag placed loosely over the top. Change the water if it becomes cloudy, and use the asparagus within about seven days.

Asparagus can be pickled and stored for up to one year. To pickle one pound (450 mg) of asparagus:

You can also preserve asparagus by blanching it for about 3 minutes and storing it in freezer bags in the freezer. Whatever method you select, your asparagus should be as tasty as it was picked fresh.