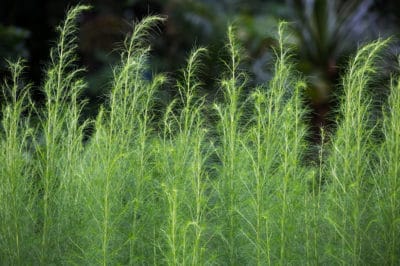 Understanding When to Cut-Back Asparagus Foliage

Asparagus plants produce a lush growth of fern-like leaves and branches during the growing season after shoots come up in early spring. These branches need to be cut down at the end of the season, but it is important not to cut them down too early because they provide nutrients to the root system in late fall and early winter as they turn brown.

While the growth habits of leaves on asparagus plants make them look a bit like ferns, asparagus is not actually a fern. However, the branches of this plant are still referred to as ferns. Asparagus ferns grow from uncut shoots which appear each spring and reach a height of 4 to 6 feet (1.2 to 1.8 meters) by late summer.

Much of the asparagus plant is hidden in the large, underground mass of tuberous roots, providing the reserve of energy for the crop of spring-time spears, and it is important these roots remain well-nourished from the energy provided by the ferns in summer along with ample irrigation during hot months.

However, the ferns continue to return nutrients to the root system as they turn brown and die-back after irrigation stops, and because of this should be left in place until they are completely brown and never cut-back when still green.

Some varieties of asparagus turn brown and go dormant more quickly than others, and some take longer. Fast-dormancy varieties include:

Varieties which take longer to turn brown include:

There is another advantage to allowing asparagus ferns to remain in place through the winter, if you are in an area with snowfall: The dead foliage catches and conserves snow and can add as much as one inch (2.5cm) of precipitation to the soil if left through the winter. This additional water can improve the crop of spears the next spring.

Controlling Weeds in an Asparagus Bed

Asparagus has both male and female plants, and both produce flowers in early summer, but primarily female plants produce berry-like seed pods containing viable seeds. The berries of asparagus plants can be a problem because the seeds drop under the plants, producing many unwanted seedlings and an extra weeding chore.

Avoid unwanted crops of asparagus weeds by planting all-male or predominately male varieties, like the Jersey hybrids, to avoid berry production and seeds. Pull weeds when they are small in order to avoid disturbing the asparagus root system, and mulch the bed overwinter with compost or straw to cut back on weeds. Pull the mulch back in early spring before the shoots emerge.