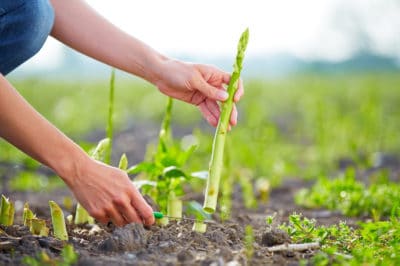 When to Start Picking an Asparagus Bed

It takes three to four years to grow an asparagus crop to the point it is ready for picking, but after that you can cut tender shoots every spring, and after five years you can extend harvest into early summer.

Asparagus beds need to grow without being harvested for the first two full growing seasons when planted from crowns, and they must grow for an additional year if started from seed. Do not harvest any shoots during the first year of growth of crowns, and only a few spears in the second year.

The reason for this is that the plants need all of their shoots for producing mature stalks, which then feed the root system with their leaves, allowing the perennial roots to grow and build up a reserve of nutrients which later help sustain the plant and shoot growth.

By avoiding all harvest of shoots during the first growing seasons, you allow the plants to develop large, healthy root systems which then provide you with the tender shoots for harvest.

As the plants grow these first years, become familiar with the difference between male and female plants and the shoots they produce. Male shoots are thicker and more abundant, and these are the best shoots for harvesting when plants are ready. Female plants devote more energy to producing berries and less to developing edible shoots. You can plant all-male cultivars and maximize your harvest.

When the plants have reached harvestable age, let shoots grow to 5 to 8 inches (12.7 to 20.3cm) in length, then snap the shoots off at the soil line by holding them firmly in your hand and bending them sharply toward the ground.

You can also use a knife to cut the stem at the soil line, but be careful not to cut into or break the root mass below the shoot. Shoots are generally first ready for picking between March and April.

After your asparagus bed has been growing for five years and more, you can harvest as many shoots as you like up through the end of June. After that, let the remaining shoots develop into mature plants to continue feeding the root system.

After harvesting, care for the plants by:

By properly harvesting and caring for your asparagus bed, you can continue to harvest shoots each year for as long as 30 years. You will probably end up with enough of this tasty vegetable to share with family and friends.