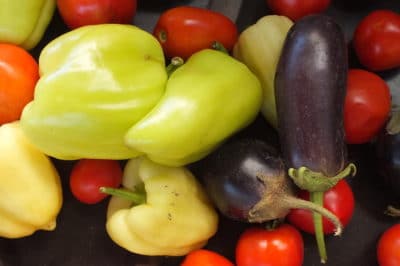 Eggplant (Solanum melongena) belongs to the nightshade family (Solanaceae), which includes several species of fruit. Many people think of these fruits as vegetables because they're not as sweet and juicy as most fruits.

The nightshades include the following four crops, popular with home gardeners. Although each of them is different, their structures and growing conditions are similar. They’re also susceptible to the same diseases and insects.

All about the Nightshade Family

Unlike eggplants, tomatoes and green peppers, their potato cousin needs cool soil to thrive. This is why potatoes grow well in northern states, like Maine and Idaho, as well as Canada. On the other hand, eggplants, tomatoes and green peppers need temperatures from 70°F (21°C) to 85°F (29°C) to grow successfully. Of all the nightshades, eggplants require the most heat, while tomatoes and peppers wilt if the temperature rises above 90°F (32°C). All nightshades need full sun and frequent watering.

Nightshades grow fast and tall, so your garden needs room for them.

Most tomato varieties need cages, trellises or stakes to keep them upright. The weight of the tomatoes can pull the plants to the ground.

Eggplants require at least 2 feet between the rows. Depending on the variety you plant, they can grow into large bushes, and some may need stakes.

As with eggplants, green peppers need 2 feet between the rows. Some varieties grow tall, and may need staking as they develop.

Members of the nightshade family suffer from similar pests. These pests include the Colorado potato beetle, flea beetle, aphids, tomato hookworm, whiteflies, snails and slugs. Planting companion plants that repel pests is helpful in preventing damage to the plants.

Although eggplants, tomatoes, green peppers and potatoes are common nightshades, several flowers and other plants belong to this family, as well. One familiar nightshade is tobacco (Nicotiana), while two tropical bushes that produce fragrant flowers, Datura and Brugmansia are also nightshades.