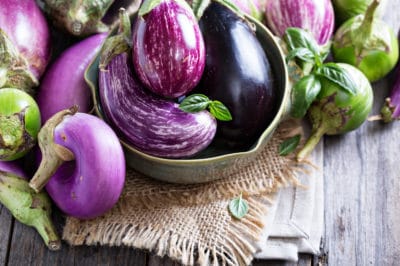 Is There a Difference between Eggplant and Brinjal?

Eggplant (Solanum melongena) has other names, such as brinjal and aubergine, which are interchangeable. No matter which of these names you use, you're talking about the same plant. It's a common misconception that eggplant and brinjal are two different plants, but they are the same species that originated in India and China.

Eggplant or brinjal, a member of the nightshade family, originally grew wild in northeast India and Burma, spreading across Thailand, Laos and Vietnam, as well as Southwest China. It became one of the most important fruits grown for world consumption, and is considered the King of Vegetables. The following countries are the leading producers of eggplant today:

The name eggplant originated when the British occupied India where the white eggplant was popular. However, today it’s called aubergine in the United Kingdom, but the term originated in France.

Brinjal is the name for eggplant used in India, and derived its name during the 16th and 17th centuries from the Portuguese word beringela.

During the Renaissance, the Italians coined the term mala insana for eggplant, which means mad apple, while the Greeks gave eggplant the name poma amoris, which means love apple.

Eggplants belong to the nightshade family (Solanaceae), along with tomatoes, potatoes and green peppers. Many people think the nightshade plants are vegetables, but they are fruits. When growing nightshades, with the exception of potatoes, they need full sun with temperatures of 70°F (21°C) to 85°F (29°C) for the best results. Eggplants need more warm weather than tomatoes or peppers, but all of these plants wilt in temperatures over 90°F (32°C). All nightshades need weekly watering.

Benefits of Eggplant or Brinjal

No matter what you call it, eggplant is delicious and nutrient rich, making it a healthy, satisfying addition to your menu. Eggplant is full of vitamins and minerals, as well as fiber and the antioxidant, nasunin, which protects your cells from damage. The other antioxidants in eggplants help prevent high cholesterol, and strengthen your resistance to viruses.