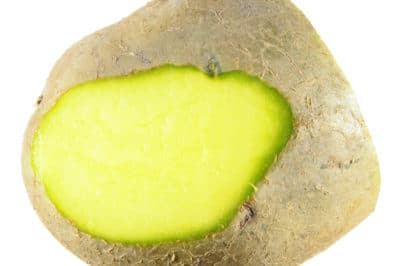 Why Are Potatoes Green?

Whether you get them from your garden or from the grocery store, potatoes sometimes have green spots. Many people believe that green potatoes are poisonous and unsafe to eat, while others don’t give it a second thought. It’s worthwhile to know exactly what causes green potatoes, what it means, if it’s dangerous, and how to keep your potatoes from going green while they’re growing.

It’s true. Potatoes are meant to grow in the ground, away from the sunshine. When exposed to sun, the potato develops chlorophyll. Chlorophyll, of course, accounts for the greening of leaves and stems and occurs in pretty much all plants.

Chlorophyll is not toxic and safe to eat. In fact, it’s considered a super food because of its antioxidant and cancer-fighting benefits, in addition to its properties as a liver detoxifier and digestive aid, among other things However, that doesn’t mean you should go ahead and eat those green potatoes. There is a second, problematic development caused by exposure to sun: solanine.

Solanine is a natural toxin that actually discourages bugs from invading your potato plants. Unfortunately, it also renders the affected portions of your tuber inedible as it is a known cause of nausea, headaches, and intestinal distress. Eating that green potato isn’t likely to be a lot of fun for you. Large amounts of solanine can make you quite ill, so it’s best to avoid it altogether.

Other common food plants that may contain solanine are:

While eating green potatoes isn’t likely to be lethal, it can make you uncomfortable, or even sick, and ought to be avoided. Luckily, you can simply remove any green from your potatoes and they’re good to go!

When preparing your potatoes to eat, wash them well. Check them for eyes, and cut these out. Pare away any green skin or potato you come across. Once the green portions have been removed, your potatoes are safe to eat.

The green portions of your tuber, or any potatoes that are unsalvageable, can be composted; like the oxalic acid in rhubarb leaves, the solanine in potatoes will break down in composting.

They way to keep from ending up with green potatoes is to avoid exposing them to light. To do this:

Should you consume green potatoes, or potato sprouts of any color, you may experience symptoms of solanine poisoning. These symptoms include stomach and abdominal pain, vomiting, diarrhea, headache, and fever. More severe symptoms, caused by ingesting larger quantities of solanine, can include delirium, hallucinations, shock, hypothermia, and dilated pupils.

If you experience symptoms of solanine poisoning, even if you ingested only a small amount of green potato, seek medical treatment immediately. While most people don’t experience problems with eating potatoes from the garden, solanine ingestion can make one quite ill.