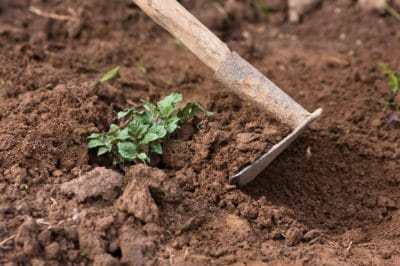 All About Hilling Potatoes

Potato food production takes place underground. As the tubers develop, they may push out of the soil or irrigation may wash soil away. The exposed tubers become inedible when subjected to sunlight as it causes the development of a toxic substances called solanine. Hilling potatoes – covering them with soil – protects the tubers.

Potatoes can be grown in all USDA Zones if you choose the right varieties and don’t plant too early. Your soil should be loose, rich, friable and slightly acid. Plant them about six to eight inches deep. Potatoes need water during the growing period; soils should be slightly moist. Keep the weeds down, as potatoes don’t handle competition well.

You can plant early, mid-season or late potato varieties and you also have multiple color choices. Here are some suggestions:

In order to develop good tubers, potatoes should be planted in friable soil. Rocks or heavy clay soils don’t allow for expansion and can result in misshapen spuds. Add coarse sand, mature organic compost and amendments like wood ashes, greensand and kelp to build up fertility and promote drainage. Dig or till to create a fine soil bed.

The idea behind hilling is to provide extra soil for growing tubers – which are part of the potato stems – and keeping the tubers covered. Some people grow potatoes on ridges or individual hills, while others plant them in trenches. While either method works, a trench makes it much easier to cover the plants during the hilling process.

When you first plant your potatoes, cover them with two to four inches of soil. Once the plants have grown about six to eight inches above ground, it’s time to hill. Gently rake or hoe loose soil into the trench or onto the hill, covering the plant about three-quarters of its length. Water well. You’ll repeat this process about three or four weeks later.

You can plant potatoes in trenches as you normally would and then cover with layers of mulch, compost or straw instead of soil. Apply these at the same time as you would normally hill with soil. Some people even use a permanent mulch system. They lift the mulch, lay the potatoes on top of the ground and then cover with mulch again.

Early or “new” potatoes are harvested about three weeks after the plants flower. Mulching makes it especially easy to reach in and remove potatoes the size of a hens’ egg or larger. If you’ve hilled your potatoes, be careful when digging so you don’t damage plants. The main crop is harvested several weeks after the tops die down.