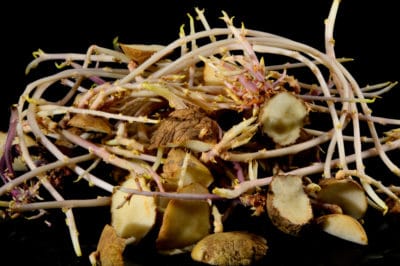 How to Plant Potatoes From Eyes

No matter how smooth the outside of a potato, the tuber always has little indentations. These are the spots from which the new stems will sprout and grow. In order to plant potatoes properly, you need to understand how the eyes affect planting success. The basic rule is no eye, no potato plant.

Potato eyes may also be called growth points or buds. When first harvested, they may look like tiny bumps or small indentations. After a dormant period, the eyes will begin to send up sprouts. Potatoes stored in warm conditions sprout earlier and more readily than those in cool storage. As the sprouts grow, roots form at the junction between the sprout and the eye.

No matter what potato variety you choose, it will have eyes. Other than that, your potatoes might be large, small, oval or finger-shaped, red, white, blue, yellow or purple. Here are some possibilities:

Small whole potatoes are often known as seed potatoes. They are usually smaller than a small hen’s egg, so they are planted as is. A potato this size may still have up to six to eight eyes. You can also plant large potatoes intact, but it’s a waste, as a fist-sized potato might be large enough to grow half a dozen new plants.

Most gardeners plant larger potatoes instead of or in addition to seed potatoes. The potatoes are cut into chunks of any size. The key is that each chunk should contain at least two eyes. After you cut them, allow them to dry in a warm dark place for a few days. This results in a “callus” over the cut area that helps protect the potato from soil-borne diseases.

Although it is not absolutely necessary, many gardeners chit their potatoes. Chitting simply means allowing the potatoes to begin sprouting. One advantage of chitting is that you know you’re planting a potato that has already developed sprouts. You can chit seed potatoes or cut up whole potatoes. In the latter case, it’s better to chit them before cutting them up.

Potatoes need fertile, well-drained soil in full sun. Many gardeners plant them in a trench about eight inches deep. This makes it easier to hill them – cover them with soil – to promote tuber development and protect the tubers from sunlight. You can also plant them in individual holes or on ridges. When the sprouts are about six inches high, cover two thirds of the stems with soil. Repeat at least once.