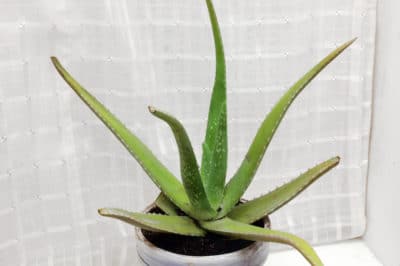 How to Repot Aloe Vera

Aloe vera can be grown outdoors in USDA Zones 9 or higher, but it is more likely to be grown in moveable containers or as a houseplant. Although it has low fertilizer needs, it should be replanted at least once a year to keep it healthy. Repotting also solves the problem of accumulating mineral salts.

Why You Should Repot

When your aloe outgrows its pot and becomes root-bound, it’s obviously time to give it new living quarters. But it’s better not to get to that point. Aloes are used to growing in relatively poor soil, but after a year or so, they typically use up all the nutrients. By then they also tend to have mineral salts in the soil as well, even if you leach them regularly.

Aloe vera’s shallow roots don’t need a deep pot. In fact, a pot that’s too deep increases the risk of waterlogged soil, which can cause rot. Nor do you want too much soil on the sides. An aloe vera’s roots should take up about two-thirds of the pot, with the rest used for soil. The pot should have plenty of drainage holes. Both plastic and glazed or unglazed clay are fine.

Aloes are desert plants, and that’s the key to understanding their soil needs. Desert soils are typically low in nutrients and drain very well. Regular potting soil or garden soil won’t make the grade. Both must be mixed with perlite, vermiculite, granite and coarse sand, with the soil making up no more than one third of the mix. Commercial cactus mix is also a good choice.

Here’s how to repot an aloe, step by step:

It’s normal for aloe vera leaves to turn brown or gray after repotting; this is not a sign of problems. The most common problem is over-watering, which causes rot. Don’t water the newly potted aloe for at least two weeks. If you break a leaf, you can use that to propagate a new plant. Let it dry for a week to develop a callus, then plant about two inches deep.