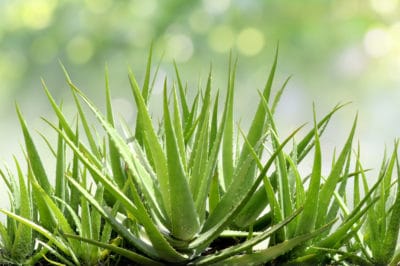 How to Grow Aloe Vera

The aloe vera has been grown for medicinal use for thousands of years. Like cacti, they must be managed with minimal water but otherwise have few needs. The inner gel is used in cosmetics and can be harvested from the plant to soothe burns. Properly managed, aloe vera will even flower.

Aloe vera is native to desert soils. It is a succulent and absolutely cannot tolerate soggy soils or standing water, so the soil must drain very well. A commercial cactus mix is a good choice. However, you can also make your own with commercial potting soil to which you add an equal amount of perlite, sand, very fine granite or vermiculite.

How to Water Aloe Vera

Like other succulent plants, aloe vera evolved to store water in its leaves during dry periods. In most cases, you need water an aloe vera only once every two or three weeks. Water the soil and let it drain completely – the just-watered soil should feel damp but not wet. Aloes need even less water in winter, when they are semi-dormant.

Most aloes don’t need fertilizer. They get all the nutrients they need from an occasional repotting with fresh soil. However, you can use fertilizer, but no more than once a year. The fertilizer should be water soluble and higher in phosphorus than nitrogen or potassium. Dilute to half strength and apply in the spring only.

Aloe vera likes bright light. In the wild, aloe plants grow in full sun all day. They may tolerate a little shade but don’t need sun protection as many house plants do. They will do well with bright light from a west or south-facing window when growing indoors. While an aloe may tolerate some dappled shade, it will not do well in deep shade.

Aloe Barbadensis-miller is probably the most common variety sold, but there are many aloe varieties such as these:

Aloe flowers will produce viable seed. Plants must be at least four years old. Collect dark brown or black seeds and use within a year. Plant on top of a fast draining medium such as half-and-half perlite and sterile compost. Cover lightly with sand, keep moist and grow at 75°F (24°C). Seeds germinate in two to four weeks. Transplant when plants have four leaves.

Aloe vera produces small offsets known as pups. In late winter or early spring, once the pup has developed several leaves and has some roots, cut it from the mother plant with a clean sharp knife. Leave in a warm dark room for two days to develop a callus. Replant at the same depth it was previously growing. Do not water until roots have taken hold (two weeks).

Although pups generally are more likely to produce viable plants, you may be able to grow an aloe from a leaf cutting. Cut the leaf near the base with a sharp knife. Allow it to develop a callus in a warm, dry dark room for about a week. Plant the leaf base about two or three inches deep and keep in bright indirect light. Water sparingly to prevent rot.

The most important rule of thumb is less soil, so the roots fill about two-thirds of the container. This decreases the risk of over-watering. Aloe roots are shallow and grow horizontally, so a wide, shallow pot is a better choice than a deep one. The pot must have plenty of drainage holes. In humid climates unglazed clay or terra cotta may be a better choice to promote evaporation.

Although most people grow aloe vera as a houseplant, you can definitely grow it outside in USDA Zones 10b and above. Some people are successful growing it in Zones 8 and 9. Temperatures must never drop below 40°F (4°C). Aloe vera is highly sensitive to frost and will quickly die if exposed to cold. Many people grow it outdoors only in the summer.