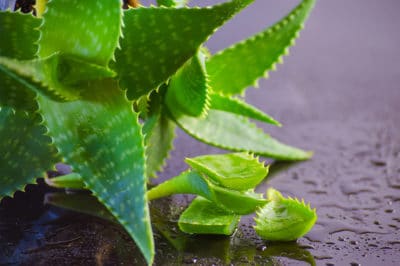 How to Care for an Aloe Vera Plant

The aloe vera – nicknamed the burn plant – is a spiny-looking succulent with fleshy leaves. The plants are easy to grow indoors and can also be grown in the garden in some areas. With increasing age and the right care, you can encourage an aloe vera to bloom. You can also harvest the juice to use for burns and skin care.

What is an Aloe Vera?

Aloe vera is one of a group of succulent tropical plants that grow wild throughout the world. Native to Arabia, it has become naturalized in many other places. The plant has fleshy, gray-green leaves with serrated edges tipped with small spines. It has many nicknames, including burn plant, first aid plant and burn aloe, and is also called Barbados aloe, Chinese aloe and Indian aloe.

Are There Different Varieties?

Aloe vera is one of many different kinds of aloe plants. Although there is only one variety of aloe vera, there are many closely related species, including:

What Colors Do Aloes Come in?

Aloe plants range from an unremarkable gray-green color to pinks, reds and browns. In most cases, these colors shade the basic gray-green along the leaf margins or surfaces. In addition, the plants may be striped, mottled or splotched, usually with white or yellow. Flower colors are usually in the orange range, with some shading more to red and others more to yellow. Some aloes also have white flowers.

How Do I Grow Aloe Vera Indoors?

Aloes are well-suited to indoor culture. They prefer a small container with good drainage as they normally grow crowded together. Use commercial cactus mix or make your own from potting soil and a material like and or perlite. Give the plant bright, indirect light but not full sun, especially in a south-facing window. Water sparingly – once every three or four weeks. Fertilizer isn’t usually necessary. Trim any withered leaves.

Can Aloe Vera be Grown Outdoors?

Aloe is a tropical plant that developed in areas with what is called a Mediterranean climate – hot summers, mild winters and rain primarily in the “wet” season of winter. If you live in such a climate, which is usually found in USDA zones 8 through 11, you should be able to grow aloe outdoors. In colder climates, you can always move potted plants outdoors in the summer.

What Kind of Soil Do I Use for Aloe Vera?

Aloes will generally grow well in any soil with excellent drainage. In the wild, you’ll find them in sandy soils or soils with a high percentage of gravel. You can mix sand, granite, grit or perlite with commercial potting mix or garden soils to make your own. Commercial potting mixes made specifically for succulents and cacti are also available.

How Do I Water an Aloe Vera?

Aloe vera plants typically live in environments where rainfall is infrequent. They will not tolerate excessive water in the soil. When you water, water deeply but make sure the soil drains completely. In summer, aloe plants should be watered about every three weeks. If you receive summer rainfall, don’t water at all. In winter, an aloe plant can easily go five or six weeks without water.

How Do I Fertilize an Aloe Vera?

Aloes used as houseplants or in gardens don’t usually need fertilizer. They come from environments with poor soil and have adapted to those conditions. If you decide to fertilize aloe plants, do it only once a year in the spring. Choose an organic fertilizer with extra phosphorus. Water soluble fertilizers are the best choice; they should be diluted to half strength.

Can I Grow Aloe Vera From Seeds?

Aloe vera can be propagated from seed. Mature plants (four years old or older) will produce seeds from their flowers. Black or dark brown seeds are ripe, while light-colored seeds won’t germinate. Harvest seeds from dried flower seed pods and use within a year. Sprinkle seeds on moist growing medium, cover with a little fine sand and germinate in a warm place. Transplant when they have four or more leaves.

How Do I Propagate Aloe Vera?

Aloe vera can be propagated from stem cuttings or pups – offsets that a mature plant creates. Using pups is the easiest method, as they need only be separated from the mother plant and planted. Once the pup has four or five leaves or is about one-third the size of the mother plant, cut it off with a sharp, sterilized knife and replant, Don’t water for one week.

Can I Grow Aloe Vera From a Stem?

Aloes will grow from a piece of stem, although some may rot before they grow. For best success, when you cut the leaf, use a sharp knife to make a straight-edged cut. Allow the cut leaf to dry for about a week. It will form a thick white callus on the cut end. Insert the leaf, callus end down, into rooting medium, place in bright indirect light and water sparingly.

What is Aloe Vera Gel?

As is common with succulent plants, aloe vera leaves are filled with a slimy tissue that helps the plant store water. Aloe gel is the thick clear liquid that comes from the cells in the center of the leaf. It is about the consistency of a fruit jelly. The gel has been found to contain vitamins, minerals, antioxidants and amino acids.

Experts are divided over whether aloe vera should be considered an edible plant. Part of this confusion stems from the difference between the gel, which is often used in smoothies and commercial drinks, and the latex, which is not considered edible. Aloe in large amounts can be toxic, so if you do choose to eat the gel in some form, use it in small amounts and only for a short time.

How Do I Harvest Aloe Vera?

The primary reason to harvest aloe vera is to extract the gel from the leaves. You can cut off individual leaves or harvest the entire plant. Even if you don’t want the gel, leaves should be pruned periodically to keep the plant healthy. Simply cut one or more leaves from the plant with a sharp, sterile knife. Split the leaves lengthwise and cut out the thin slab of clear gel material.

How Do I Preserve Aloe Gel?

Once you’ve obtained the gel from the leaves, place it in a blender and blend until liquid. Let the froth settle, then pour into a small glass jar. You can also pour small amounts of gel into ice cube trays and freeze. Fresh aloe gel can be kept in the refrigerator for about a week. Frozen gel will last several months and individual cubes can be removed as needed.

Why Doesn’t My Aloe Vera Flower?

Aloes used as house plants are unlikely to bloom, primarily because they don’t get enough sunlight. They must also be fully mature – at least four years old. If your plants are old enough, try moving them into full sunlight outdoors as soon as temperatures warm above 60°F (15°C) in the spring. Plants that are correctly potted, watered and fertilized have the best chance of blooming.

Does Aloe Vera Have Any Pests?

Scales, mealy bugs, aphids and snout beetles are the most common insect pests of aloe plants. Scale and snout beetles can cause the death of the plant, while the others tend to weaken plants and make them more susceptible to disease. Hand pick or squash insects, or use insecticidal soap sprays to control them. Healthy plants can better withstand insect attacks.

Is Aloe Vera Susceptible to Any Diseases?

Rots from over-watering are the most common disease problems you will face when growing aloe. You can treat them by cutting away diseased tissue with a clean sharp knife. Apply an organic fungicide to the cuts. Aloe cancer, or witches broom, is a highly contagious viral disease spread by insects such as mites. It’s best to destroy infected plants immediately.

How Long Will An Aloe Vera Live?

In the wild, aloes in their ideal setting can be extremely long-lived – some reach 100 years. In an indoor or garden setting, a life span of five to 25 years is more likely. Healthy plants, obviously, tend to live longer. Insect infestations, diseases and damage from animals may shorten the plants’ lifespan. Over-watering, however, is probably the primary reason aloes die early.