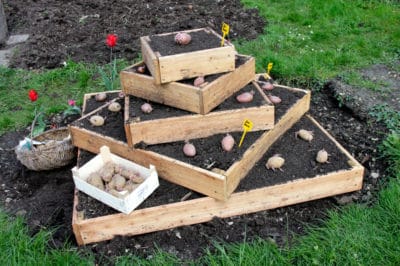 How to Build a Potato Tower

While potatoes are commonly grown in garden rows, there are other options. Growing them in structures such a potato tower takes less space and can make it easier to harvest, as no digging is involved. Potato towers can often be made quite inexpensively from recycled materials and don't require specialized skills.

Potatoes are actually quite easy to grow. They need rich fertile soil that is loose and friable; heavy clays can result in deformed potatoes. Potatoes need regular water while growing, although you should stop watering once the tops begin to die down. Fertilizer isn’t usually necessary if you start with fertile soil. Weed competition will cut your harvest significantly, so keep them weeded.

Potato towers involve some sort of container to allow the tubers to grow vertically. They can be made from stacked tires, woven wire fencing, chicken wire on stakes or from used pallets. Essentially anything that can contain some soil to allow the potatoes to grow in can be used as a potato tower. Rather than digging, you can push up the wire or dismantle the tower to harvest.

You can use any kind of soil for a potato tower. A great advantage of the tower is not needing to till the soil. However, your potatoes will grow best in loose, friable soil with plenty of humus. Amend the soil with aged manure only – fresh manure can cause scab – or with well-rotted leaves or organic compost. Commercial potting soil also works well.

You can put a potato tower anywhere in your garden. For that matter, you can build a potato tower on a concrete patio or driveway, or over an area of soil too rocky to till. The most important part is placing the tower in full sun. It’s also a good idea to place the tower where you’ll have easy access with the hose, as potatoes need plenty of water while growing.

Since potatoes develop along the buried stem, the theory behind a potato tower is that you can plant them in layers. The plant will develop potatoes all along the stem. In reality, planting this way may crowd them and decrease your harvest. Don’t crowd the plants – give each plant at least three cubic feet of soil.

It can be hard to identify indeterminate potatoes. Indeterminate varieties are often labeled as long-season. These are good possibilities and include different colors, baking potatoes and fingerlings, as well as heirlooms:

Some gardeners have access to discarded tires. They stack the tires three high, fill them with soil and plant potatoes in the center. If the tires are all the same size and you stack them carefully, the tower will be stable and needs no additional support. Organic gardeners might have concerns about chemicals leaching with this method, however.

The four-foot fencing used to keep small animals like goats and sheep can make a good tower. Cut a four-foot length, roll the wire into a cylinder and fasten the ends to make a wire cage. Put some soil in the bottom, then place straw along the side to prevent soil falling out. When you have a foot of soil, plant three or four potatoes. Repeat until the tower is full.

This is similar to the method used with wire fencing, but since the openings in chicken wire are smaller, straw usually isn’t necessary. Either keep the cylinder no larger than three feet in diameter or make a square and stabilize with posts at the corners. It’s also better not to use tall wire – three feet in height is plenty.

When you build a potato tower with pallets, you’re essentially building a raised bed. Most pallets are about four or five feet square, and you can grow quite a few potatoes in that space. Wire or otherwise fasten the pallets together and fill with soil. Plant as you would in any garden or raised bed. Watch for boards rotting due to moisture.

The biggest concern with wire towers is that they may fall over. Most gardeners anchor them with posts or stakes. Wire towers may also dry out too fast. Tire towers are less likely to shift. If you’re planting on a slope, you might want to brace the downhill side with posts. Potatoes grown in towers can’t spread out and may not produce as well. You might only get little tubers.

Don’t go into the concept of using potato towers with the idea that you can grow lots of potatoes. The confined space of potato towers means your harvest is limited, especially if you try to plant too many. It’s better to plant fewer potatoes in the tower than you would in the garden. If you really have limited garden space or are growing on a patio or deck, however, a potato tower may be a solution.

Harvesting is one of the easiest parts of growing potatoes in a tower. Place a tarp next to the wire towers and tip them over. Separate soil from the potatoes with your hands. For a pallet tower, place the tarp in front of one section and take off the pallet. Tire towers are heavier and may require some digging unless you have something like a tractor with a chain to lift them up,