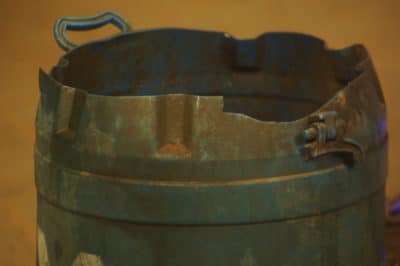 How to Create a Potato Barrel

Potatoes will grow quite happily in containers, including a potato barrel. The idea behind a potato barrel is to layer seed potatoes into a confined space for a large harvest. Like their relatives, indeterminate tomatoes, potatoes don't mind having much of their stems buried. In fact, they'll form tubers all along the stems.

A potato barrel could be an actual barrel, but a 50-gallon trash can is another option. Barrels might be made of wood or plastic – occasionally, they’re made of metal. If your barrels are being recycled, the former contents might affect your potatoes’ health. Barrels that contained petroleum products, for example, shouldn’t be used to grow food.

If your barrel was recycled, give it a good scrub with liquid dish soap and brush. Rinse well and air dry. Good drainage is a key step in growing potatoes in a barrel. Drill holes about ½ inch in diameter every six inches around the bottom of the barrel. Repeat about one inch above the bottom on the barrel’s sides. Put the barrel on bricks or blocks to ensure better drainage.

Soil for a Barrel

Potatoes like acidic soil and good drainage. A sandy loam with a little extra peat moss or chopped pine needles is a good choice. You could also mix commercial potting soil half and half with well-aged compost. If you’re using your own garden soil and it’s heavy clay, amend it by at least half with a mixture of coarse sand, rotted leaves or similar organic material.

Sprouting your potatoes improves the odds that they’ll grow well.

Place six to eight inches of soil mix in the barrel. Plant seed potatoes about eight to 12 inches apart. Water them well. When these have reached six inches in height, cover three-quarters of the stems with soil and plant another batch of potatoes. Repeat until the barrel is full. Keep the soil in the barrel moist but not soggy.

Around six to 10 weeks after you plant, your potatoes will flower. You can dig down to the first layer and harvest new potatoes at this point. Anything at least the size of a hen’s egg is ready. For the rest of the harvest, wait until three or four weeks after the tops have died down. Tip the barrel over onto a tarp or piece of plywood and sort out your potatoes.