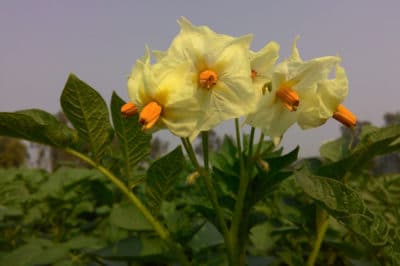 All About Potato Flowers

Potatoes are grown all over the world and are an important food source for many people. Natives of South America – most likely Chile or Peru – the tubers are a versatile food and store well under the right conditions. In addition, they produce attractive flowers that many people overlook in their focus on producing tubers.

The potato is easy to grow, providing its cultural requirements are met. It likes a slightly acidic soil with plenty of potassium and good drainage. Potatoes are grown in every climate and USDA Zone in the United States, although not all varieties will do well in all zones. Make sure they have plenty of water during the growing season.

Potatoes range from the classic white baking potato to fingerlings and colored potatoes. Thousands of varieties exist. These are commonly available:

Why the Potato Flowers

Like all plants, potatoes use multiple tactics to ensure survival. New plants will grow from tubers, but the plant also produces flowers that develop a berry-like fruit full of seeds. Insects can pollinate the flowers, resulting in different varieties, while those grown from tubers always reproduce true to type. Potato seeds do take a long time to produce plants.

Although you might not think of them in that way, potato flowers can be very ornamental. A perennial in its native lands, the potato is typically grown as an annual in the vegetable garden. However, it can also be grown in a flower bed, where the flowers add an attractive accent. It is best to grow it behind other plants, however, as the tops will die down once the potato tubers are ready to harvest.

Potato flowers are white or colored in shades of red, pink, blue or purple. All have yellow stamens. Color intensity varies – some are very pale and others deeply colored. Many of the white-flower varieties are not pure white, but may be streaked faintly with another color. In most cases, the color of the tuber indicates the color of the blossom.

Potatoes are members of the Solanaceae family, related to plants like tomatoes and nightshade. All of these have similar flowers. Most of the flowers have five pointed petals, although in some cases the petals are more rounded or joined at the base. Some are recurved. A prominent stamen, usually bright yellow, arises from the center of the flower.

Potatoes can be pollinated by almost any kind of insect. While bees are often after the pollen, other insects may land on the plant or brush it with their wings. The movement triggers the dispersal of pollen, which may fall on the plant and self-pollinate it. Potato pollen is also spread by the wind. Humans may pollinate the plants with a paintbrush or cotton applicator to create hybrids.

The emergence of potato flowers is a signal that tubers have begun to form. “New” potatoes can usually be harvested about three weeks later. These tubers range in size from a hen’s egg to a tennis ball and are usually very flavorful. Shortly after this, the plant tops will begin to wilt and die, signaling that the full-size tubers are about three weeks from harvest.