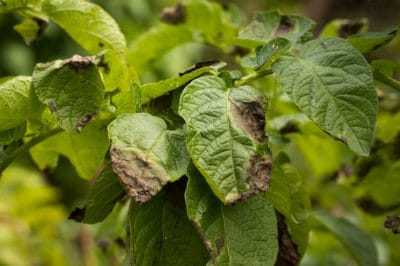 Potato blight is a fungal disease that has been a major player in several famines in Europe, Ireland and Scotland. It can also infect other members of the solanaceae family, notably tomatoes. The blight is favored by moist, warm environments and can be difficult to control. The smell is distinct and can identify the disease.

Two types of fungi can infect potatoes and cause what is known as blight – Phytophthora infestans and Alternaria solani. Both are called potato blight, with the first being known as late blight and the second as early blight. The initial infection occurs in the leaves and then moves to the tubers. Potato blight can devastate the entire crop and contaminate the soil.

Potato blight was a major factor in the emigration of many Irish and Scots to America in the 1840s. In Ireland, especially, the famine resulting from the blight was thought to have killed more than a million people who were dependent on the crop. One reason the famine was so destructive was that most Irish were growing the Irish Lumper variety, which was very susceptible to blight.

Smith and Hutton periods are formally defined conditions that create the conditions necessary for blight to become a problem. The Smith period is a 48-hour period in which the minimum temperature is 50°F (10°C) and the relative humidity exceeds 90 percent for 11 hours in two consecutive days. A Hutton period is two consecutive days with minimum temperatures of at least 50°F (10°C) and relative humidity of 90 percent for at least six hours.

The spores of the blight fungus can lie dormant on a plant until conditions are right. The first sign of an infection is usually brown speckles on the leaves. These may spread to larger patches with a yellowish border. The foliage begins to wilt and turn brown as it rots. Watering or rain spread the fungus to the tubers, which develop dark patches on the skin and rot inside. Potato blight also has a distinct odor.

If your springs are wet, plant early varieties. Blight risk increases as the weather warms. These are all blight-resistant, with Elba at the top of the list:

Bordeaux mixture is the traditional spray for blight. It is a liquid mix of copper sulfate and slaked lime diluted in water. It is approved for organic use. It is usually applied as a preventive when Smith or Hutton periods occur. You may also be able to find some herbal organic preparations. Neem oil preparations have been found to be effective against some blights.

At the first sign of blight, cut off infected plants and burn them. If the tubers have already started to develop, leave them in the ground for about three weeks to prevent infection. Keep tubers well hilled up to prevent blight spores from dropping on them. Examine stored potatoes every day or two and destroy any that show signs of blight.

Good garden sanitation is one of the best ways to prevent blight from taking over. Remove all potatoes when you harvest. Rogue out volunteer plants. Don’t leave cull potatoes lying around. Always water the base of the plant rather than spraying the leaves. Clean your tools and wash your hands, especially after handling infected plants. Clean storage areas each spring and let them dry all summer.

Organic prevention strategies can help prevent blight or decrease its effects. Potatoes need an ample supply of potassium and may be more prone to blight if your soil is low in potassium. Excess nitrogen can produce lush growth that is more susceptible to blight. Plant your potatoes on ridges in the direction of the prevailing winds if possible. Good air circulation helps decrease blight risk.