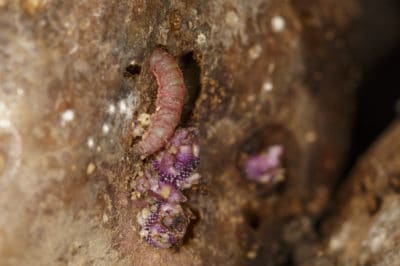 The potato worm, also known as the potato tuber worm, potato tuber moth or tobacco splitworm, feeds on potatoes, tomatoes, peppers, eggplants and tobacco. Adult moths feed on nectar, but the larvae eat leaves and tubers. A serious infestation can cause the complete loss of a stored potato crop. It is found in most states and USDA Zones where potatoes are grown.

Although there are three different types of potato worms, the one most commonly found in the U.S. is Phthorimaea operculella. Tecia solanivora, the Guatemalan potato moth, is common in Central America and the northern countries of South America. Symmetrischema tangolia, the Andean or South American potato moth, attacks stored potatoes in the Andes.

History of the Potato Worm

Potato worms have been a minor pest in tobacco plantings for over 100 years. More recently, the insect has become a major pest in North Carolina. The pest has been found in tropical, subtropical and Mediterranean climates. Although found in California in 1856, it did not become a major concern for growers in the Pacific Northwest until 2002. Potato tuber worm has been reported in 25 states and over 90 countries.

Adult moths have narrow bodies, just under ½ inch long, with a wing span about the same. The insects are grayish brown with yellowish brown forewings. Wings are fringed and have elaborate dark brown markings. Males have two or three dark spots on the forewings, while females have an “X” pattern in the middle of the back. Both are fast fliers. They live for one to two weeks.

The larvae of potato tuber moths are typically white or yellowish with a brown head. The midsection of the body is also brown. They have black points and bristles on each segment. As the larvae mature, they change colors, going from white or yellow to pink or green. About ½ inch long, they feed for two weeks before spinning a cocoon and pupating.

It’s important to know when these insects emerge and the length of the various life cycles. For example:

Survival of the Pest

Adults are typically found from April through October in the US. Potato worm eggs, larvae and pupae can survive readily in potato debris, volunteer potatoes or in the soil where potatoes have been gown. They may be found in potato cull piles, stored potatoes, dead leaves or crevices of storage areas, as well as storage containers such as crates and boxes. Temperatures below 50 °F (10°C) will interrupt larval development, however.

The adult moths feed on the leaves of the plant. Larvae, however, feed on leaves and well as tubers and cause the most damage. In addition to feeding, the larvae spin silk in the cavities they create and deposit excrement there as well. A single larvae can make the potato unfit to eat. Larvae can destroy an entire crop of stored potatoes if the infestation is severe; the tubers will rot and have an unpleasant smell.

Unfortunately, synthetic pesticide resistance is a problem in potato tuber worms, and none of the available organic insecticides are effective, although pyrethrum may be used on seed potatoes. Two wasps, Copidosoma koehleri and Bracon gelechiae Ashmead, are known to be predators of the larvae but are not usually readily available. Pheromones can be placed in containers of water to attract the moths, which then drown.

Always use certified disease-free seed potatoes. Plant them at least two inches deep – three or four is better – and hill them at least twice during the growing period. Irrigate to keep soil moist; this prevents cracks through which larvae can reach the tubers. Rogue out volunteer solanums such as eggplants and tomatoes. Harvest the crop as soon as possible after maturity and remove harvested tubers from the garden to cure.

As with any insect pest, good garden sanitation practices make a difference. Keep weeds down and remove garden debris, old mulch and dead vines promptly. Destroy piles of cull potatoes. Screen the storage area to keep out moths. Use new or well-sanitized potato sacks, crates or other containers for storage. At the end of each storage period, thoroughly clean the storage area.