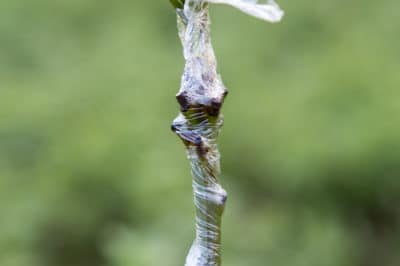 Tips on How to Graft Mango Trees

Although you can grow a mango tree through planting seeds, propagation through grafting isn’t hard and the trees’ have advantages over those that are seed-grown. With grafted trees, you know exactly what to expect in the type and taste of the fruit, and they start producing several years sooner than seed-grown types. With a little patience and preparation, your grafted mango tree should bear a bounty of sweet, juicy mangoes for years to come.

You can easily grow your own rootstock seedling by planting a polyembryonic seed obtained from an Indochinese mango. You can identify these type of mangoes by their green and yellow colors, and elongated shape. They lack the colorful hues, and roundish shape of Indian mangoes.

Tips for planting the seed include:

Expert Tip: When deciding when to plant your seed, consider that it might take a few months for your seed to germinate and grow to a suitable size. In addition, it’s best to graft the scion to the rootstock during the warmest months of the year.

Although you can graft a mango scion through various grafting techniques including, chip budding, whip and cleft grafting, the most reliable technique is through veneer grafting.

Expert Tip:  If you are unable to graft the scion to the rootstock seedling immediately after taking it, you can store it inside a plastic bag and place in the refrigerator. You can safely keep it there for up to two weeks before you need to use it.

Once your mango seedling rootstock has achieved a suitable size and your scion is ready, you can now accomplish the graft. It’s best to select a scion that is approximately the same diameter as the rootstock.

Once you’ve connected the two sections together, place the grafted mango seedling into a shady location out of direct sunlight and care for as usual. The graft should begin connecting in about three weeks.

After the scion develops a flush of leaves, cut the rootstock off just about the graft and remove any suckers that might arise from it.