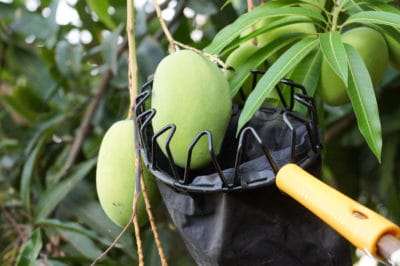 You’ve waited for months for your mango (Mangifera indica) fruits to ripen, and maybe even years for the tree to start producing fruit, and now you’re wondering when you’ll be able to harvest. Although mangos are broken into two races, Indochinese and Indian, each type’s fruits ripen at different times throughout the season. Continue reading for tips on types and when and how you can harvest your tasty mangos.

Mango Classification Based on Ripening Stage

With over 500 named cultivars, there are quite a few mango varieties to choose from, though you will most likely only locate types that grow well in your particular region. Depending on the cultivar and your climate, mango fruits generally ripen and are ready for harvesting sometime between May and September, though some types may ripen earlier or a bit later.

Based on when the fruit is ripe, mangos are classified as early, mid-season and late-season. As expected, an early-season variety is ripe earlier than a late-season type. Some cultivars based on their season of expected ripeness are listed below.

Expert Tip: Mango fruits are ripe and ready to harvest in anywhere from 100 to 150 days after the tree flowers.

Mangos ripen on the tree and you don’t have to pick them all at one time. This allows you to harvest the mangos as you are ready to eat them. However, if ripe fruit are left on the tree too long, they will eventually drop to the ground. Depending on the cultivar, mango fruits weigh anywhere from several ounces to several pounds.

You can also harvest the mangos once they are mature but still firm. Bring them indoors and allow them to ripen out of the refrigerator. The skin becomes a bit softer and the mangos achieve full ripeness in anywhere from several days to a week. Once they become ripe, you can store the mangos in the refrigerator.

Tell-tale signs of mango ripeness include:

Expert Tips: The outer skin of the mango is inedible and you only consume the inner flesh, which depending on variety, can be yellow or a deep orange color when ripe.

Mango fruit should easily pull from the tree, or you can cut each one off with pruning snips. If you are dealing with a large tree where you can’t easily reach the ripe fruits, you can use a pole harvester with an attached basket to remove the ripe mangos. Some people are allergic to the sap so you might wear gloves when harvesting.

Once harvested, wash the ripe fruit to remove the sap. The sap causes black spots on the mangos and leads to rot.