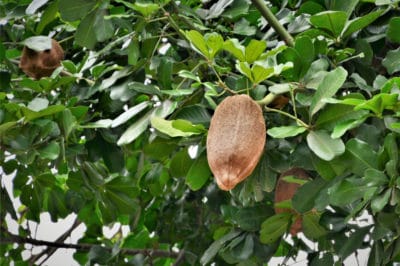 How Do Brazil Nuts Grow? Only with Nature’s Helping Hand!

Among the ranks of “things not what they seem,” Brazil nuts stand with macadamia nuts, almonds and walnuts. Why? Because none of them are true nuts. They’re drupes, with a fleshy layer enclosing shells containing their edible seeds. And the way Brazil nut drupes grow showcases how an ecosystem's plants, insects and animals can cooperate for the benefit of all.

Brazil nut trees (Bertholettia excelsa) tower 100 to 150 feet tall above the Amazonian rainforests. Canopies of glossy, deep green leaves measuring up to 100 feet across crown their straight, gray-barked trunks. Flourishing in the forests’ rich, well-drained soils, the trees are so dependent on their ecosystem that cultivating them elsewhere is nearly impossible.

Brazil nut trees flower during summer’s dry season, typically between October and December. Each morning, clusters of large, lidded pale-yellow blossoms open at the ends of their branches. By evening, they’re on the forest floor.

Only Euglossine (aka orchid) bees are strong enough to open the lids of Brazil nut flowers’ nectar chambers. In the process, they transfer pollen from the outer stamens to the ovaries within, creating the next generation of Brazil nuts.

Before they can attract females, male Euglossine bees must collect fragrant chemicals from orchids growing near the Brazil nut trees. Without this romance-stimulating “perfume, “ the bees would die off, the trees would go unpollinated and the Brazil nut industry would collapse.

After pollination, a drupe needs between 12 and 18 months to ripen. Mature drupes weigh from 2 to 4 pounds (2.2 to 4.4 kilograms) and resemble coconut encased in mahogany. Each outer shell houses a layer of tough, fibrous material enveloping s chamber with up to two dozen tightly packed nuts. Ripe drupes fall to the ground with tremendous force.

Without a way to disperse their seeds, Brazil nut trees would eventually disappear. Help comes from a large, tough-jawed rodent, the agouti. After gnawing open a ripe drupe and snacking on some nuts, the agouti often caches the leftovers in the soil. Those buried where sunlight can reach them may eventually become trees.

If any plant demonstrates the struggle confronting natural ecosystems faced with encroaching modernization, it’s the Brazil nut tree. Once common in the rainforests of:

Today, it’s abundant only in Bolivia and Suriname. Sadly, it’s listed as threatened with extinction in Brazil, where deforestation has sacrificed countless Brazil nut trees to create roads, bridges or farming and grazing lands.