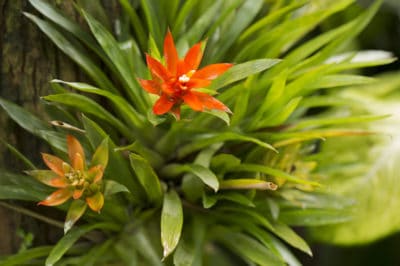 Guzmanias – and Guzmania lingulata in particular – are popular bromeliads to grow indoors because they are easy-care and provide striking flowers in shades of red, orange, yellow, plum, white and even multicolors. Once the plant has flowered, it will begin to produce offsets called pups, which you can use to grow more plants.

Most commercial growers sell their plants in the bloom stage. These plants will be showy for about five or six months, but will then begin to produce pups. You should provide the right temperatures, light, watering and fertilizer to the mother plant to help ensure that the pups are healthy and will handle separation and repotting well.

Guzmanias are an epiphytic form of bromeliads, so your pups will need one of the following for best growth:

The most important factor in choosing a pot for bromeliads is that it drain well. Plastic pots may retain water, but unglazed pots can evaporate excess water through the side. If you have high humidity, an unglazed pot may be the best choice. Guzmanias have relatively shallow root systems and the mother plants may never need repotting. The pups will do well in small pots.

Dividing the Pup From the Mother

Gather your supplies: pots; soil mix; a clean, sharp sanitized knife or small saw. You may also want a smaller sharp knife for trimming leaves. Turn the mother out on your work surface and locate the area where the mother and pup are joined. Make a clean, straight vertical cut between the two; cut the mother, not the pup. The mother can be repotted, but if it is obviously deteriorating, discard it.

Place the pup into the prepared pot. Dribble soil around the roots and firm gently. Make sure it’s at the same level as it was in the old pot. Water until water runs out the drainage holes. Set the pot in bright indirect light and allow the plant to dry out until the top two inches of soil is dry before re-watering. Don’t fertilize for several months.