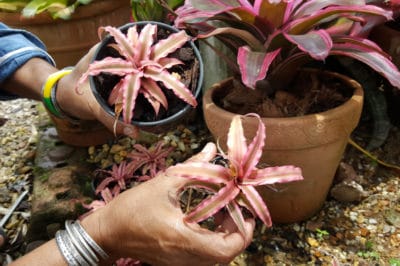 How to Propagate Bromeliad Pups

Bromeliads – like the familiar pineapple – are unusual and beautiful tropical plants. The group includes a wide variety of different growth styles, flower colors and shapes. Given the right conditions, bromeliads will reproduce through asexual means, by producing miniature offsets of the mother plant known as pups. Propagating these pups is a good way to increase your collection.

Bromeliads have three growth styles. These are:

Many bromeliads can produce seeds. This is more likely in wild settings, as the plant must have just the right conditions as well as insects or birds (usually hummingbirds) for pollination. Saxicolous bromeliads are more likely to reproduce with stolons. The epiphytic and terrestrial bromeliads are usually propagated with pups, which are usually not produced until after the plant has flowered.

Bromeliads will not produce pups unless they have the right growing conditions. They need bright, indirect light (not full sun). Most prefer temperatures between 65°F (18°C) to 90°F (32°C) during the day and 50°F (10°C) to 65°F (18°C) at night. They want to dry out in between waterings and don’t like wet feet, so soil should drain well. However, they also like plenty of humidity in the air.

Most bromeliads won’t flower until they are about three to five years old. The bloom is long-lasting – several months in most cases – but the plant dies within a year or two of blooming. However, to compensate, it produces one or more pups to become the new generation. Let the pup grow until it is at least one third the size of the mother plant before dividing them.

Cut the pup from the mother with a clean, very sharp knife. Cut into the mother, not the pup itself. The cut should be straight down and should go into the soil to include the roots of the pup. Place the pup in a new pot at the same level as it was in the old pot. Water, let drain and place in bright indirect light.

When a Pup Has No Roots

Sometimes the pup will not develop roots even though it has reached a size to be repotted. However, epiphytic bromeliads in particular seem to use their roots to anchor themselves rather than for nutrients. Some growers recommend waiting until roots develop. Others remove the pup and plant it anyway, providing a prop to stabilize the pup until roots develop.