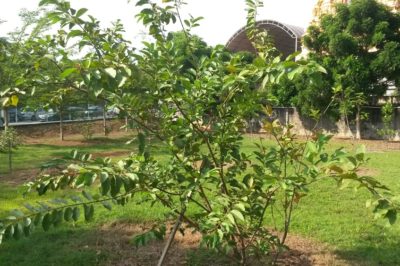 How to Care for a Guava Tree

Native to Mexico and other regions in the tropical Americas, guavas (Psidium guajava) produce delicious fruit that is high in vitamin C. They can be grown as trees or pruned into a fruit-bearing hedge. Guavas can also be grown in sunrooms and greenhouses if your climate is otherwise too cold.

Guava is definitely a tropical or subtropical fruit. Usually grown as small trees, they might reach 20 feet. The flowers have an exotic appearance, with a star-like burst of stamens in the center. They will do best in USDA Zone 10, but if you can provide a microclimate and frost protection, you may be able to grow them in Zones 9 and 11.

You have a number of possibilities when selecting guava. Among them are:

Guavas need fertile soil to grow and produce well. Add plenty of organic humus in the form of well-rotted manure, leaf mold and compost to your garden soil. The soil should also drain well, so if your soil has a lot of clay, coarse sand or fine granite will be helpful. Guavas prefer a soil pH of 5 to 7. The tree will not tolerate soil that is high in salts – don’t try to plant it near the ocean except in containers.

Although guavas originated in very warm climates, they are not desert plants and have no tolerance for drought. You should water at least once week by thoroughly soaking the soil. Ideally the soil should always be a little moist. However, the tree doesn’t do well in water-logged soils. If your soil drains poorly, plant in a raised bed or containers with good drainage.

Producing as much as 80 pounds of fruit year means a high demand for nutrients. Guavas need plenty of nitrogen, phosphoric acid and potash, as well as smaller amounts of magnesium. A typical guava fertilizer will have an NPK ratio and supplemental magnesium – it will read something like 6-6-6-2. Work into the soil just prior to the growing season. Add additional fertilizer every two months.

Guavas produce better with pruning. Some people grow them in hedges, because the fruit is produced on new wood, so pruning doesn’t affect the crop. Prune the plant to a single trunk when you first put it in the ground. In early winter, prune suckers, competing shoots and any branches that are broken or rubbing together. Don’t prune the canopy until the second year.