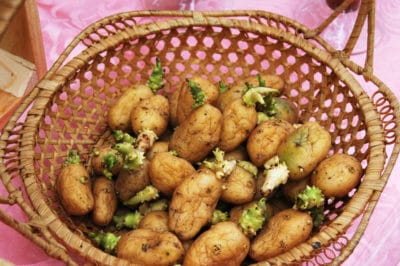 How to Chit Potatoes

Many gardeners chit, or sprout, their potatoes before planting. Chitting can help you get a jump on the season; especially important if you have problems with Colorado potato beetles. It also ensures that every potato you plant has already demonstrated that it can grow. Chitting isn't difficult or time-consuming – the potatoes do most of the work.

Chitting is important in several situations. If you aren’t sure of the viability of your potatoes, or if you’re trying to grow them from store-bought tubers, chitting will prove they can grow. When you want to get them in the ground as early as possible or you’re trying to time plantings, chitting can give you a several-week head start on the season. The voracious pest known as the Colorado potato beetle is less of a problem with early plantings.

When You Can Skip Chitting

If you’re trying to force potatoes for an early crop, you can skip chitting. These do best planted in black plastic bags filled with organic compost. Bury the potatoes in the soil and water. The heat and moisture will force sprouting. If potato beetles aren’t a problem and/or you have plenty of time and room, you can simply plant potatoes without chitting them.

Temperatures and light are key to proper chitting. You want a cool but not cold environment, with temperatures around 50°F (10°C). Don’t allow your chitting potatoes to be exposed to frost, however – it can kill the shoots. You need bright light but not direct sunlight. Place the potatoes on end, with the end that has the most eyes pointing upward.

In some cases, chitting is beneficial to shorten the growing period or to avoid disease. The following varieties may benefit from chitting:

Sometimes, potatoes don’t seem to want to chit. One of the main reasons – especially if you are growing your own home-raised potatoes is lack of dormancy. Potatoes must be stored over winter in a cold environment to break dormancy. Commercial seed potatoes may have been stored too long and become shriveled. Grocery store potatoes that are not organic may have been treated with sprout inhibitors.

Potatoes need loose, fertile soil, so prepare your planting area well ahead of time. Many gardeners prefer to plant in trenches as it makes hilling easier. Dig a tench about 12 inches deep. Rub off all but the top three or four sprouts before you plant; it means better growth. Place the chitted potatoes with the sprouted ends up and cover with three or four inches of soil.