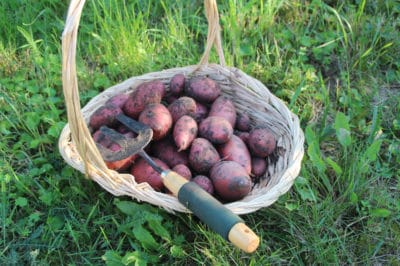 When to Harvest Red Potatoes

Red potatoes can vary in color from a light pink to deep red. The interior flesh may be white, ivory, pink or yellow. Some are high in starch and others are waxy. In short, red potatoes have a lot of different qualities. In addition, red potatoes may be early season, mid-season or late season, which affects when you harvest them.

No matter what color your potatoes are, the basics don’t change. Potatoes need highly fertile, loose soil that drains well. They should be fertilized with a balanced organic fertilizer or compost. While they may develop diseases in soggy soil, they do need regular moisture during the growing period. Always keep down weeds to prevent competition for water and nutrients.

New red potatoes are just what the name implies – they have not yet reached maturity even though they are large enough to eat. No matter what the maturity length of a potato variety, you can harvest any of them as new potatoes. These are usually ready about three weeks after the plants flower. Eat them immediately as they won’t store well. Harvest the main crop six to eight weeks later.

Mid-season red potatoes will typically mature within 80 to 100 days and can be harvested at that time. How well they store depends on the variety and storage conditions. Some do not do well in warm climates. These varieties include:

Late season, storage or main crop potato varieties lean heavily to the russet type rather than red potatoes. They may have an expected maturity of 130 days. Romanze is one of the few late season red potatoes. It has light red skin and yellow flesh. Desiree, Red Cloud, Red Maria and Red Pontiac are also possibilities. These potatoes are often not harvested until fall.

Although red potatoes can be grown in all USDA zones, the season of the variety and the planting time will usually have the biggest impact on when you harvest. If you plant an early variety as soon as the ground can be worked, you may be able to harvest by late May or early June. Plant a late variety at the same time and it will probably be July or August before you harvest.