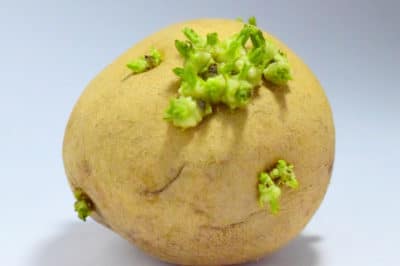 How to Sprout Potatoes

The practice of sprouting potatoes before planting them has been going on for centuries. As with many gardening activities, however, there are times when it's really necessary and times when you can skip the step. If you're undecided about whether to sprout your potatoes it's helpful to understand the benefits of the practice.

Potatoes are cool-season vegetables that can be grown in all USDA Zones. They are nearly always vegetatively propagated with small whole potatoes or cut chunks of larger potatoes. The sprouts emerge from depressions in the skin called eyes. As the potato plant grows, it is hilled – covered with soil – to encourage the development of tubers along the underground stems.

The Benefits of Sprouting

One definite benefit of sprouting your potatoes is that you know each potato you plant is viable. This can be particularly important when planting cut up chunks, as not all eyes will develop sprouts. You want each chunk to have at least two good eyes. Another benefit is that sprouting can give you several weeks’ jump on the season, which can be important in very cold areas or for succession planting.

When Sprouting is Critical

Although you can plant potatoes without sprouting them first, sprouting ahead of time is more important under certain conditions. For example:

While the bag of grocery potatoes you leave in the cabinet will sprout on their own, that doesn’t produce the healthiest sprouts. Spread the potatoes on a level surface in a warm room with bright, indirect light. Mist them once or twice if the humidity is very low. Allow the sprouts to grow until they are about three inches tall and showing healthy green leaves.

Potatoes require a dormant period to sprout. If you store your potatoes – especially homegrown potatoes in a warm location, they won’t sprout because they need a period of cold first. Put them in the refrigerator in a paper bag for two to four weeks. If you’re trying to grow grocery store potatoes, those that are conventionally grown may have been treated with sprout inhibitors.

Before you plant, ensure your soil is rich, fertile and drains well. Add amendments such as rotten leaves or aged manure and a little wood ash to promote acidity. Dig a trench or individual holes about eight to 12 inches deep. Plant the potatoes or potato chunks with the sprouted eyes up, about one foot apart. Cover with four inches of soil and water well.