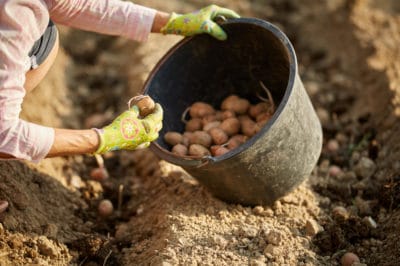 How to Grow Potatoes From Potatoes

Potatoes are typically grown either from small whole potatoes or from larger potatoes that are cut into smaller pieces. Either will produce a new plant as long as it has at least two eyes. Planting these “seed potatoes” ensures your crop will be genetically identical to what you planted.

Potatoes typically do best in cooler environments similar to the areas in Chile and Peru where they originated. They need light, friable soil that drains well and has plenty of nutrients. Although they can be grown in all USDA zones, you may need to adjust planting times. Colder zones require later plantings, while desert areas mean fall planting. Water well while growing.

Potatoes come in a variety of colors and shapes. Some have very deep, distinctive eyes. Possible choices include:

So What’s an Eye?

Although some potato varieties do produce seeds, the plants are usually grown from tubers known as seed potatoes. The eye is the spot from which new shoots and roots will emerge – this is called sprouting or chitting. Seed potatoes may be small whole potatoes or cut up chunks of larger potatoes. In either case, the potato must have at least two eyes to grow properly.

Potatoes that are stored for any length of time will eventually begin to break dormancy. Clusters of buds begin to appear at the eyes. These buds are the precursors to the potato stems. Even when stored in dark conditions, the potatoes will grow sprouts that elongate as they search for light. Sprouted potatoes can be planted, but it’s best to do so before the stems reach six inches in length.

You can plant potatoes without chitting (allowing them to sprout), but most gardeners chit them. The advantage of chitting is that it ensures viable eyes – not all eyes will develop sprouts. Chitting simply means putting the potatoes in a warm, bright place to let the sprouts develop. Whole potatoes are cut into chunks after they are chitted and allowed to callus for a few days before planting.

Once the sprouts are two or three inches tall, your potatoes are ready to plant. Dig a trench or individual holes about 10 to 12 inches deep. Plant small whole sprouted potatoes or the chunks you have chitted and allowed to callus. Each potato or chunk should have at least two good eyes. Place the eye facing up and cover with four to six inches of soil.