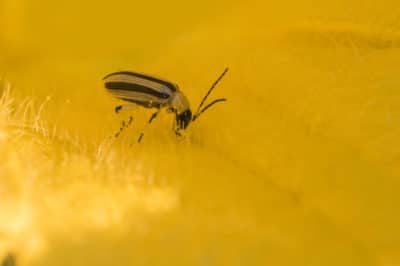 How to Get Rid of Cucumber Beetles

How Do I Recognize a Cucumber Beetle?

Where Do the Cucumber Beetles Come From?

The adult beetles arriving in spring have spent the winter concealed in garden debris, compost heaps or trash piles. Until your cukes are large enough to feed them, they survive on weeds. Females deposit yellow-orange eggs in the soil around your plants, where their larvae munch on cuke roots and stems before pupating and emerging as a new generation of adults.

Expert gardener’s tip: Cucumber beetles are one great reason to keep the cuke patch free of debris, trash and weeds.

Do All Three Beetles Behave the Same?

No. Spotted and banded cucumber beetles attack and deposit eggs on more than 200 different plants. Striped beetles favor cucumbers, melons, pumpkins and other curcubits. Striped and banded beetles deposit their eggs in the soil around their feeding sites. The larvae of all three, however, consume roots and tunnel through underground stems.

How Do the Beetles Damage Cucumbers?

The adult beetles feed on cuke leaves, pollen and flowers. Every female flower they eat means one less cuke for you. The larvae may kill cuke seedlings by eating their developing roots. The most serious damage, however comes when adult bugs carrying bacterial wilt infection spread it through the cucumber patch.

As bacteria causing the infection spread through a cuke plant’s vascular system, individual leaves begin wilting and shriveling. A plant in the early stages of disease may recover at night, only to go limp in the heat of the following day. Unchecked, the disease consumes entire branches until the whole vine collapses.

Pruning leaves and stems as soon as they wilt may halt the infection’s progress in the affected cuke. Sterilize your pruning tools in rubbing alcohol between cuts and after use, so they don’t contaminate other plants.
The only sure way to keep bacterial wilt from spreading is to remove and destroy infected plants. Otherwise, beetles feeding on them will become carriers.

Are Any Cucumbers Resistant to Bacterial Wilt?

Planting the following wilt-resistant cucumbers may be your best guarantee of a healthy harvest:

Going with these robust varieties also reduces the threat of other common diseases, including powdery or downy mildew and cucumber mosaic virus.

The most effective cucumber beetle remedies are organic row covers made of permeable, lightweight fabric. They keep beetles off the cukes while letting air, sun and water reach them. To use row covers:

Expert gardener’s tip: To pollinate your cukes after the flowers appear, lift the covers and identify the female blooms from their swollen stems. With a small, soft-bristle artist’s brush, transfer pollen from the center of a male bloom to the centers of the females and replace the covers.

What Other Organic Cucumber Beetle Control Options Do I Have?

Organic cucumber beetle control takes time, but the rewards are a harvest — and garden — free of harmful chemical residues.