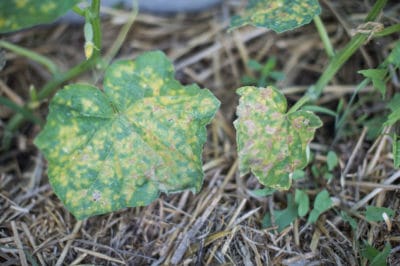 Although they appear for a variety of reasons, yellow leaf spots on a cucumber’s leaves have one thing in common: they’re a sign of a plant in trouble. Not all yellow cuke spots, however, are alike. With our tips, you’ll be able to recognize the differences, so you can diagnose where they came from and what to do about them.

This disease begins with light yellow spots on the oldest leaves near the base of the cuke vine. The spots give way to whitish-gray, powdery blotches. As they engulf the leaves’ surfaces, brownish lesions pop up on their undersides. In the worst cases, the entire cuke vine withers and dies.

Downy mildew disfigures a cuke’s leaf surfaces have pale-green spots that change to yellow and then brown as they spread. It covers the leaf backs in fuzzy, grayish-purple spores. The affected leaves eventually turn completely brown and die.

Both mildew diseases thrive in warm, moist or humid conditions. They pose the biggest threat to cucumbers growing in too much shade.

The most economical and environmentally friendly mildew management methods are preventive ones:

Expert gardener’s tip: To treat mildew, prune and dispose of affected leaves. Don’t compost them, and be sure to disinfect your pruning tools in rubbing alcohol between cuts and after use.

If your cuke’s leaves display tiny yellow flecks that change to big brown spots, suspect the Alternaria leaf blight fungus. Without treatment, the leaves will dry up and die. Use the same prevention and control measures you would for mildew management.

Cucumber mosaic virus spots, streaks or mottles leaves with yellow. It may also mottle the fruit. Sap-sucking aphid insects spreading the incurable disease can wipe out an entire cuke patch, so it’s best to remove and destroy your affected vines. In the future, plant CMV-resistant cuke varieties, such as ‘Marketmore 76,’ ‘Cool Breeze,’ ‘Spacemaster 80’ or ‘Southern Delight.’