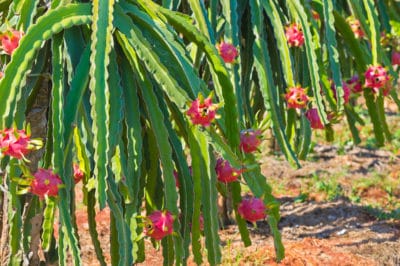 Where Does Dragon Fruit Grow?

Dragon fruit, also known as pitaya, pitahaya and strawberry pear, is a climbing, night-blooming cactus. Native to Central America, it is grown commercially in similar climates. It is an uncommon garden plant in the US but should do well in the right climate. In marginal climates, it can also be grown in containers.

All About Dragon Fruit

The climbing cactus known colloquially as dragon fruit can grow 15 to 20 feet tall in its native habitat. The plant flowers at night and blooms last only a day. Dragon fruit has multiple bloom cycles and in the right conditions can produce five or six crops a year. The bright pink or yellow fruits are edible. They may be white or pink inside, with tiny black seeds.

The dragon fruit is native to Central America and has been found growing wild in southern Mexico, Costa Rica and El Salvador. Other areas where these plants were originally found include Brazil, Colombia, Ecuador, Panama and Uruguay. As these locations indicate, the plant prefers the tropics. As a cactus, however, it needs excellent drainage and is sensitive to over-watering.

As one might expect given its origin, dragon fruit is sensitive to frost. Gardeners in USDA Zone 9 may be able to grow the plant in containers if it can be moved indoors to a sun room or greenhouse for the winter. Those who garden in Zones 10 and 11 can usually grow the plant outdoors, either in containers or in the garden itself.

Dragon Fruit in the Garden

If you live in USDA Zones 10 or 11, you should be able to grow dragon fruit. The plant has the following cultural needs:

Although dragon fruit is certainly not as common as more conventional fruits, it is often available in specialty stores, Asian groceries and farmers’ markets. Vietnam is the largest commercial producer. Israel, Thailand and Australia grow dragon fruit commercially, although Australia’s production is not sold outside the country. Other Asian countries such as Malaysia, the Philippines and Taiwan grow dragon fruit.

Dragon Fruit in the US