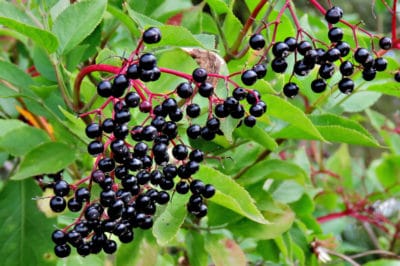 Grow Elderberries for Fruit and Flowers

Often found growing wild, the elderberry plant is easily grown and produces plenty of fruit year after year; the attractive and fragrant white flowers that grow on this bush are also edible, and quite tasty. Continue reading to learn about what an elderberry needs to grow well and give an abundant harvest of delicious berries.

Other varieties of elderberry do not grow so large, but they are not as popular and some of them are not edible. American and European elderberries are your best bet.

Elderberries are not picky, but they do like soil that is consistently moist, slightly acidic, and which contains plenty of organic matter. Amending your soil with compost before planting is a good idea, as is ensuring good drainage; while your berries like moisture, they don’t thrive in excessively wet ground.

You’ll Need to Do a Little Work

While you’ll expend minimal effort for maximum reward when growing elderberry bushes for fruit or flowers, there are some things you’ll want to do.

You’ll Need to Know This

A great aspect of elderberries is that they don’t have a lot of issues with parasites, insects, or diseases. Pruning dead branches serves to prevent cane borers from infesting your plant, and while very wet weather can allow some leaf diseases to appear, but these are not generally a big concern.

Elderberries are generally ready to harvest in August or September. Watch for the berries to reach a deep, dark purple color and then prepare to remove them from the plant. As elderberries will often fall from their stems at the slightest touch, it is often easier to simply cut each cluster of berries off the plant and gently place them in a bucket.

A single, mature elderberry bush can produce about 12 to 15 pounds of berries, so be prepared! Elderberries are quite popular for making jams, jellies, syrups, wines, and more, but they don’t store well on the counter or in the freezer and will become inedible quickly. You’ll need to process the berries into recipes soon after harvesting.