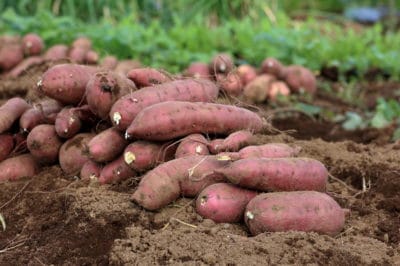 Where are Sweet Potatoes Grown?

Sweet potato is a highly frost-sensitive plant, which limits where it can be grown. It prefers long, hot summers, but gardeners in colder climates can also grow it by using season-extending techniques. The tubers provide a major portion of the food supply in many developing countries, ranking sixth on the major crop scale that includes wheat, rice, potatoes and corn.

Sweet Potato as a Food Crop

Although in the US, sweet potatoes are often a holiday delicacy, in developing countries, the tubers may be a major food source. The plant will grow at altitudes from sea level to over 8,000 feet. It does not take as much labor or water as crops like maize and rice. The plant will tolerate dry spells and poor soil, although the size and numbers of tubers may be reduced.

Sweet potatoes can be grown in any area where their basic requirements can be met. These include:

Sweet potatoes need a long growing season – a minimum of 150 frost-free days. They do very well in USDA Zones 8 through 11, although they need irrigation in many areas to produce a decent crop. In the warmest areas, they may become perennial if they have a good water supply. Desert gardeners may be able to harvest two crops.

Its frost sensitivity limits the sweet potato in colder USDA Zones. However, gardeners down to Zone 5, which has an average of 165 frost-free days, may still be able to grow a crop. The key is to start the slips indoors and grow in a greenhouse for a few weeks. Cover the soil with black plastic at least two or three weeks before planting out. Use short-season varieties like Georgia Jet.

In the United States