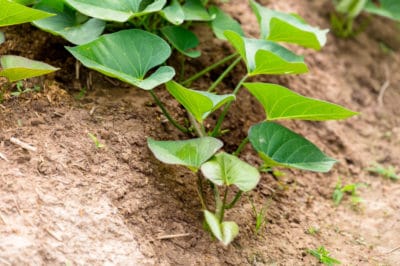 How Long Do Sweet Potatoes Take to Grow?

The sweet potato – sometimes called yams even though true yams are a different plant entirely – is easy to grow in warm areas. These perennial tropical vines can produce considerable food for the amount of space they need and even the leaves are edible. They also make attractive houseplants.

Native to the tropics and sub tropics, sweet potatoes grow readily in USDA Zones 8 and 9; they may even perennialize. With the use of a season extender like a greenhouse and a slightly earlier harvest, you can even grow sweet potatoes in colder areas. They need a loose, friable soil and will grow better if the soil is reasonably fertile. In dry areas, they should have regular irrigation.

Sweet potatoes are grown from sprouts called slips. They emerge from a tuber placed in water and allowed to root in the water. Once the slips are five to six inches long, they can be removed for growing on. Once the tuber is placed in water, it takes about two to four days to grow roots and about a week to sprout. The slips take three or four weeks to grow enough for removal.

Slips can be removed as soon as they have reached the necessary size. Grasp the base of the sprout and pull; leaving a hole in the tuber. Place the slips in water and let them grow for another two or three weeks, then plant them in potting soil or the garden at the same level or slightly deeper. The total length of time from sprouting to planting slips takes about five to seven weeks.

You can leave the sweet potato tuber in water and grow it as a vining houseplant instead of removing the slips to plant. Slips, or spouts, will appear within about a week. How long it takes to grow an actual vine depends on how long a vine you want. It should begin to branch about four to six weeks after the sprouts first appear and will continue to grow until the tuber is exhausted.

Growing Vines in the Garden

Once you’ve planted the slips in the garden, they will become long vines and ramble about on top of the soil. The tubers begin to develop about two to three months after the slips are planted. Unlike Irish potatoes, you can’t harvest new potatoes but must wait until the tubers are mature. Depending on the variety, this can take anywhere from three to five months after planting.

Different varieties of sweet potatoes mature at different times and may vary in maturity by several months. Climate and weather also have an impact. Here are some typical varieties:

It is possible to grow sweet potatoes in Zones like USDA 6 or 7 with careful planning. First, you must start your slips indoors at least eight weeks before the last expected frost date. It’s best to use a short-season variety. Second, warm up the soil with black plastic before planting. Finally, don’t try for maximum size, start checking early enough to harvest before frost.

Scientists and growers have been experimenting with varieties that will grow in the desert on minimal water. These varieties have an expected maturity of 120 to 140 days. The slips are grown in special nutrient-rich plugs and are drip irrigated. In many desert areas, two crops can be obtained by planting one in October with harvest in January and a second in December with harvest in April.

Knowing When Sweet Potatoes Are Ready

Unlike Irish potatoes, sweet potatoes don’t flower and the vines don’t die down until after the first frost. However, they will begin to turn yellow late in the season, which is a good indication that the tubers are ready for harvest. The exact time depends on when they were planted and if they were planted straight after removal from the tuber or grown a while first. Generally, harvest is in September to October.

Once you are sure your sweet potatoes are mature, pull up the vines. Use a potato fork with three or four tines to loosen the soil about 18 inches around the plants. Start at the perimeter to minimize the possibility of damaging tubers. Dig carefully and lever the tubers out of the soil. Sweet potatoes must be cured for about seven to 10 days before storage.