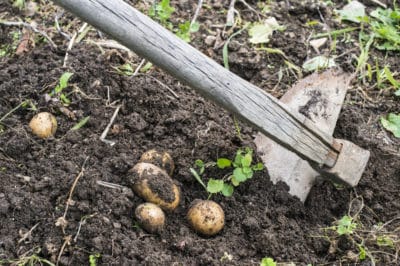 When to Harvest Potatoes

The potato is native to South America but has spread throughout the world. It was the mainstay of the Irish diet in the late 1700s and early 1800s until blight wiped out much of the crop and caused a famine. Potatoes are very easy to grow and the harvest period can be long if you plant different varieties.

How Do I Grow Potatoes?

Potatoes are annual vines that grow from whole or parts of tubers. Cool-season vegetables, they need rich, fertile, well-drained soil and adequate water while growing. Don’t use fresh manure, which can cause scab, but do amend the soil with well-rotted leaves or aged manure. Mulch to conserve moisture and keep down weeds. Hill with soil to protect tubers from light.

Where Can I Grow Potatoes?

Potatoes can be grown in USDA Zones 3 to 10. However, planting times are distinctly different. In very warm areas, potatoes should be grown as a winter crop. In colder areas, they can be planted in late fall or early spring. Pick varieties that have been developed for your area for best success. You can grow potatoes in the ground or in containers.

What Are Early Potatoes?

Potatoes are grouped according to how long it takes for them to mature. Early potatoes, as the name implies, are the first ones ready for harvest. However, any potato can be harvested before maturity once it has reached the size of an egg or slightly larger. These are sometimes called new potatoes and are harvested as soon as the plants flower. These potatoes do not store well.

What Early Varieties Should I Plant?

Early potatoes are varieties that reach maturity about 75 to 90 days after planting. These are usually available:

What Mid-Season Varieties Should I Plant?

Mid-season varieties typically mature between 95 and 110 days. Many are heirloom varieties and some can also be used as late-season potatoes. They include:

What Long Season Varieties Should I Plant?

Maturity rates for long-season potato variteis range from 120 to 135 days. Again, many are heirloom varieties:

Can I Harvest in Spring?

If you live in a warm climate and planted potatoes in fall, spring will be your usual harvest time. It’s best to use small whole potatoes rather than cut pieces for fall planting. Harvest new potatoes immediately after flowering and mature potatoes after the tops die down. Gardeners in colder climates may be able to winter over potatoes and harvest in late spring.

Can I Harvest in Summer?

Early to late summer is the primary time to harvest new potatoes, early and mid-season varieties. Pay attention to the expected maturity dates as a guide to timing your harvest. However, digging a few potatoes will give you a better idea of whether they’re ready. Almost any potato can be harvested once it is the size of a large hen’s egg.

Can I Harvest in Fall?

Early to mid-fall is harvest time for late-planted and long-season potatoes. These also tend to be the varieties that you’ll want to store over the winter. Make sure you get all the tubers, as these are the potatoes most likely to show up as volunteers next spring. Prepare and store properly to ensure they attain maximum keeping qualities.

How Do I Know When Potatoes are Ready?

Maturity dates, flowering and die-down are the three keys to harvesting potatoes. The projected maturity date will give you a guide, but confirm by actually digging up a few potatoes. Two to three weeks after flowering, you can harvest new potatoes – egg-sized tubers that have a delicate flavor but won’t store well. This is usually June or July. Potato tops die down at full maturity, late August to October. Harvest three weeks later.

How Do I Get Ready for Harvest?

Once the potato plant is about six inches tall, you’ll hill at least twice. Don’t hill after the tops start to die down. Stop watering once plants start to wilt. This helps the tuber mature and decreases curing time. Get your storage areas ready. Plan for dry weather as the tubers need to cure. Always harvest before a hard frost is expected to occur.

How Do I Harvest Potatoes?

How you harvest potatoes depends on your growing situation and the quality of your soil. Loose, friable soil makes harvesting much easier. If you have grown your potatoes on a ridge system and hilled them well, you may be able to remove them from the soil with your hands. If you grew them in a container, you could simply tip it over. In most cases, however, you’ll dig them up with a garden fork

How Do I Cure Potatoes?

Once you’ve gotten your potatoes out of the ground, they must be cured before storage. Brush off the dirt – don’t wash as it increases the chance of rot. Ideally, potatoes should be cured at 45 to 60°F (7 to 16°C) with a humidity of 85 to 90 percent for two weeks. In a cool humid climate, you could do the curing in a dark outdoor shed. Don’t allow sunlight to reach the tubers.

How Do I Store Potatoes After Harvest?

After curing, sort and discard soft, shriveled or blemished potatoes. Store between 40 and 45°F (4 to 7°C) in a dark room with high humidity. Potatoes will turn green if exposed to light and will sprout if too warm. Do not allow the tubers to freeze. Keep potatoes away from cabbage and apples, as they release ethylene gas that can make potatoes sprout early.

Can I Store Potatoes in the Garden?

The answer to this question is a qualified yes. Yes, if the ground doesn’t freeze hard in your area – snow cover is less of a problem. Yes, if you don’t have heavy winter rains or clay soil, which can become waterlogged. Yes, if you’re doing this in late fall and if you mulch the potatoes well. You’ll need to harvest before they start to sprout in spring. Try it with a few initially as a test case.