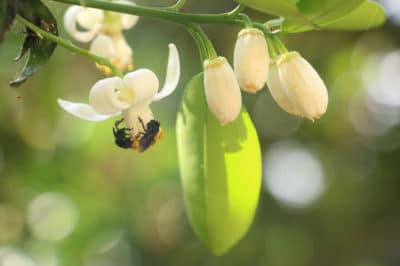 When Do Orange Tree Flowers Bloom?

When an orange tree (Citrus sinensis) is old enough, it blooms in spring. Exactly when varies from year to year, depending on the local weather conditions. Orange blossoms exist only to produce the seeds that will become the next generation of trees. So it’s critical that they bloom when conditions favor favorable fruit and seed formation. To learn more about the blooming process, read on!

At the end of the growing season, orange trees enter a dormant state. They focus their energy on growing the flower buds that will produce the following year’s crop of fruit. In the cooler parts of USDA plant hardiness zones 9 through 11, dormant orange trees need frost protection. Buds suffer damage at temperatures below 27°F (-2.7°C).

Soaking the soil out to the trees’ drip lines the day before frost is expected helps them withstand frost damage. Heat building up in the wet soil during the day gets released to warm the trees at night.

As soon as warming spring days awaken them from their dormancy, orange trees start the seed-building process. When the temperature is consistently above 55°F (12.8°C), their buds unfold into clusters of snowy, five-petaled blooms.

The time it takes for an orange blossom to mature into fruit ranges from seven to 15 months, depending on the tree’s variety:

When an orange tree gets the care it needs, it will bloom so heavily that 99 of every 100 flowers will wither and die before getting pollinated. If it happens to your tree, don’t be concerned. What you’re witnessing is the tree making sure it can support the maturing fruit.

To bloom and fruit its best, an orange tree needs eight or more hours of daily sun and well-draining, loose organically rich soil.

Expert gardener’s tip: A newly planted orange tree needs up to five years to bloom. Before channeling its energy into flowering, it must establish its roots and grow the canopy of leaves that will support its future harvests.