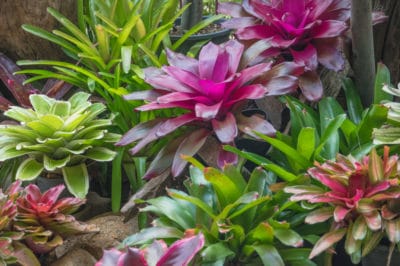 What Is a Bromeliad?

Bromeliaceae is a large plant family, with more than 50 genera and over 3,000 known species. An extremely diverse group, bromeliads can be tiny miniatures or large giants. They might look like a yucca plant or green grass, provide edible fruit like the pineapple or hang from trees (Spanish moss). They come from different climates as well.

Despite their diverse appearance, bromeliads have a few common characteristics. First, all are tropical or sub-tropical plants, although a few can tolerate temperatures just above freezing for a short time. Second, all have leaves arranged in a spiral fashion called a rosette. In some the leaf base overlaps and forms a water reservoir. Finally, they all have tiny scales on their leaves – called trichomes – for water absorption.

Bromeliads are almost exclusively found in the New World tropics and subtropics – one species is native to West Africa. The majority come from South America. Depending on the variety, they may grow at altitudes from sea level to 14,000 feet. Some grow in hot dry deserts, while others prefer moist rainforests. Some bromeliads are also found in cooler mountain regions. Many are used as houseplants or grown outdoors in USDA Zones 9 and above.

Bromeliads belong to one of three main groups. Some species may have two growth patterns. The main groups are:

The most well-known bromeliad is probably the pineapple (Ananas comosus). Columbus brought specimens back to Spain in 1493 after finding it in the West Indies. This lush tropical fruit quickly spread into regions where it could be cultivated, like India. The pineapple is one of the bromeliads that grows in the ground, and is the only one that produces an edible fruit.

In most cases, bromeliads only flower once. Some flowers are so small or inconspicuous that they are not noticeable, but the plant’s leaves may be extremely colorful. Others are dramatic and might tower 30 feet in the air. Flowers may last a week or two or as long as a year. Blooms may be fragrant or unscented. Once the plant has flowered, it develops offsets known as pups.

Many bromeliads are used as houseplants, particularly those with colored or patterned leaves. Tillandsias (air plants), Guzmanias, Aechmeas and Vriesias are readily available. Some do better in sun rooms or greenhouses, others make good windowsill plants. In addition the Caroa species is cultivated for fiber. Pineapple is also the source of bromelain, which is used to tenderize meat.