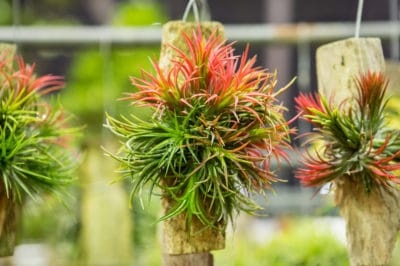 Bromeliads encompass many more plants than the common pineapple. Some grow without soil, others maintain their own “compost piles” and still others blush before they bloom. They have extremely divergent growth habits, colors, shapes and sizes. This large and diverse group supplies fiber, food, meat tenderizer and beauty indoors and out in USDA Zones 9 and higher.

Epiphytic bromeliads attach themselves to trees, vines, buildings and even telephone wires in their native habitats. They use the structures that would otherwise be their roots to fasten themselves securely to a perch. The plants are able to absorb water and nutrients from the air through structures called trichomes on their leaf surfaces, giving them the nickname, “air plants.”

Bromeliads include a variety of different shapes that would not seem to be related at all. Among these are:

The pineapple – the only edible member of the bromeliad family – contains an enzyme known as bromelain. Although it is present in the leave and fruit, it is extracted primarily from the stem. The enzyme is able to digest proteins and is used as a meat tenderizer. It has also been used to help treat severe burn wounds by debriding damaged tissue.

Many bromeliads have a cup in the middle of the central leaf rosette. Called “tanks” in some species, these cups collect rain water and dew. They act as a reservoir for the plant. In addition, debris from other plants falls into the cup and small insects may die and leave their bodies to rot. Frogs or birds may also supply nutrients through their droppings.

The temperature range across the bromeliad group is quite wide. The usual recommendation is 70 to 90°F (21 to 32°C) during the day and 50 to 70 °F (10 to 21°C) at night. With higher humidity and good air movement, many plants can handle higher temperatures. On the low end, most prefer a low of 50°F (10°C), but some can tolerate temperatures down to freezing, especially with some protection.

Unlike many other plants, bromeliads only bloom once. After that, the plant turns its energy to producing offsets called pups to reproduce the mother plant. However, the blooms can be extremely long-lasting – up to a year in some species. The flowers themselves range from dramatic to insignificant. In some cases, it is the surrounding leaves that are brilliantly colored instead.