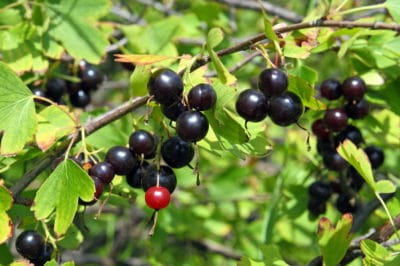 How to Prune a Jostaberry Plant

Whether you've only recently begun growing a jostaberry or you've got an established bush or three already in place, pruning them is an important part of maintaining the plant at its strongest and most fruitful; it will also help contain this wide-sprawling plant. Keep reading to find out when and how to prune the jostaberry bush for best effect.

Why Should I Prune My Jostaberry?

The jostaberry is a wonderful little berry, a cross between a black currant and a gooseberry. Hardy and thornless, the jostaberry bush tends to spread out as it grows. To control this tendency, pruning is necessary. As in other plants, pruning also encourages fruit production. Luckily, it’s also pretty simple.

Use the Right Tools and Make Sure They’re Clean

Once you’ve gathered your supplies, the first thing to do is clean your tools so that you don’t introduce bacteria or disease to your plants. Do this by pouring the hydrogen peroxide into the container and soaking the shears and loppers for half an hour. When time is up, dry your tools thoroughly and you’re ready to cut.

Before cutting, remove any broken branches from the plant. Start at the bottom and work up; this is where your ladder will come in handy. Discard all the broken branches and twigs.

Now, prune the branches, starting with any that cross over one another. The light should filter well through the branches when you are done, and no crossed or tangled branches should remain.

A third of all old growth should be cut until it’s about an inch from the ground.

Other Things to Know

The jostaberry thrives in USDA Hardiness Zones 3 through 8.

A jostaberry bush should not be pruned until it is in its second season. If you’re unsure that your plant is at least two years old, wait a year before pruning, just to be sure.

If you notice any diseased or damaged spots on your plant, remove them while pruning. This may stop problems from spreading to the entire plant.

Be sure to remove all cut trimmings when you’re done, to avoid leaving a tripping hazard and to keep them from decomposing in place.

Once you’re done, your properly pruned jostaberry bush should be straight and open-looking, and ready to keep providing fruit year after year.