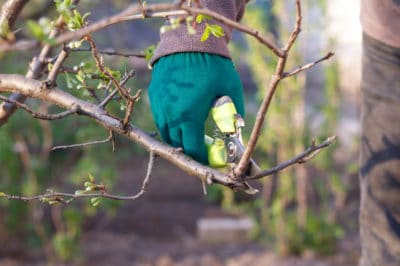 When, How, and Why to Prune Plum Trees

For some people, the thought of pruning their plum tree is a thankless task. However, if you do it right, your tree will reward you by producing a more abundant crop of delicious fruit. Once you know how to do it, pruning a single fruit tree does not take much time and only a bit of effort, and the payoff is well worth it.

What to Know about Pruning Plum Trees

Pruning fruit trees is an important part of  caring for the tree. Reasons for pruning include:

Pruning is both an art and a science, and not everyone does it the same way. It is better for your plum tree to do some careful pruning than to do none at all, so don’t be afraid. Just follow a few simple guidelines.

Pruning Plum Trees at the Time of Planting

When you buy a new plum tree for planting, it may come from the nursery already pruned. If this is the case, you only need to prune out broken branches at this time.

If your new tree has not been pruned, prune initially to create a V-shaped branch structure and cut off the top of the tree so it is between 24 and 32 inches (60 to 81cm) in height.

Prune plum trees before they bloom in late winter.

There are two basic types of pruning cuts:

Heading cuts are made along a branch at the junction of a bud. These cuts stimulate growth behind the cut.

Thinning cuts are made at the base of a branch, removing it entirely and reducing the amount of  vegetative growth. Use thinning cuts to open up the interior of the tree to light and air circulation.

Start by cutting out dead or broken branches using thinning cuts. Also remove sprouts growing up from the root stock and long whip branches growing in the interior of the tree.

On heading cuts, choose a bud which is facing outward from the inside of the tree. Cutting at this location stimulates growth outward on the tree. Make clean cuts at an angle across the branch or twig just above a bud.

Japanese plum trees grow best when pruned into a vase-shaped structure. When the tree is young, choose three to five main branches which grow upward and outward at the 10 O’clock and 2 O’clock position and cut out other limbs.

European plum varieties grow best with a central leader branch as the main structure. Head off the leader branch to stimulate lateral branches below it.

Thin out lateral branches so they form a whorl of branches coming out from the leader branch, making sure each remaining branch is spaced evenly around the circumference of the tree.