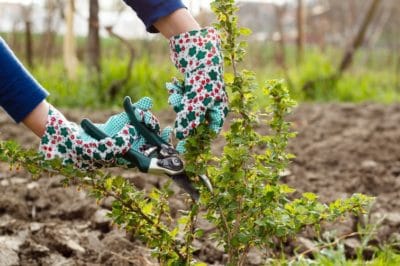 To support yield and fruit size, we recommend annual pruning of gooseberry shrubs. The right cut can significantly reduce painful scratches during harvesting. Continue reading to find out what is important when trimming gooseberries.

When is the best date for the backcut?

Experienced hobby gardeners cut berry bushes immediately after the harvest. Gooseberries are no exception. Choose a dry, warm day for pruning. This way, you ensure that cuts heal quickly— this will detract diseases and pests. It is also advisable to use freshly sharpened and disinfected cutting tools, which will further minimize the risk of infection.

In deciduous condition, berry bushes offer better fruition. There’s no reason why you shouldn’t wait until after the harvest. The pruning should be completed by the end of February/beginning of March at the latest to prepare for the new shoots.

Knowledge of the growth maximizes the cutting result

The more familiar you are with the growth characteristics of the plant, the more successful the pruning of gooseberry shrubs will be. Gooseberries fruit particularly well on the one- to three-year-old branches. These branch off from the main drives that are used in the first few years. As a result, the first step is to build up the fruit trees. In the following years, the cutting serves as preservation.

Cutting correctly in the build-up phase – that’s they key

After the planting, the ultimate goal is to cultivate three to four vigorous new shoots, annually and biannually. When you cut back gooseberries for the first time, select these shoots and cut them back to about 10 inches in spring. All other branches are cut at the base.

In the following year, prune the berry bush so that eight to twelve main shoots are formed. All surplus branches are again cut off at the base. The recommended maximum of gooseberry is thus reached, and from now on they enter the regular shape and preservation cut. The perfectly built shrub has two one-year, two two-year, two three-year and two four-year main shoots.

How to cut after assembly

If the scaffold presents itself in all its splendor with eight to twelve main shoots, concentrate on the following measures when pruning in the following years:

Pay attention to a clear arrangement of the fruit bearing rods. Cut them in such a way that a distance of 4 inches between each other is guaranteed. Also, the age of the gooseberry shoots can be recognized by their color. The darker the wood, the older the branch. If you want to be on the safe side, mark the knots with differently coloured rings.

Unless you cultivate thornless gooseberry varieties, painful scratches can be minimized by choosing the cutting tool. With a pruning shear you keep the shoots at a distance thanks to the longer handles. The necessary sensitivity for the cut is nevertheless maintained.

Cropping gooseberries skillfully on the trellis

Compared to the classic fruit bush, gooseberries on the trellis score highly with their advantageous space saving. In many hobby gardens, the fruit trellis replaces the fence and thus kills two birds with one stone. In addition, this form of cultivation offers additional space for unfolding rods. A vital plant thrives here with more than eight to twelve main shoots.

The rods that develop too far away from the stick should be removed. Otherwise, all basic shoots older than four years are cut during the annual pruning. Since the fruit-bearing side shoots find more support thanks to the trellis, a guide branch also carries more than two or three specimens.

Spindle training of gooseberries in the trend

The limited space available in the allotment garden does not prevent creative hobby gardeners from growing gooseberries. The berry bush can be cultivated into a slender spindle by means of targeted blending right from the start. That’s how the plan works:

From the top bud, the main shoot thrives in height and fertilises, while it is attached to the bar parallel to growth.

Cut not only the gooseberry bush, but also the fruit itself. After the harvest, there is still a piece of the dried flower on it which does not decompose itself by boiling down. Use a small pair of scissors to cut off the rest of the flower before preparation so that it does not impair enjoyment.