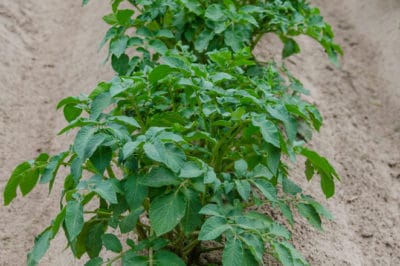 Edible potatoes may sometimes be called bushes but they are in fact a perennial vine grown as an annual in the vegetable garden. Two very decorative plants that really are bushes are much larger and another potato bush is an Australian native. Gardeners in warm climates may be able to grow all of these plants.

Although some of these are solanums, they have distinct differences as well as similarities:

Potatoes are native to South America and have been taken all over the world. In many countries, they form a large part of the diet. Cool-season tubers, potatoes will grow in any USDA Zone if planted at the proper time. They prefer acidic, well, drained and fertile soil. They don’t require complicated care and can be stored for months under the right conditions.

Lycianthes rantonnetii is a native of Argentina and Paraguay. Evergreen in warm climates, it is hardy in USDA Zones 10 and above. Although closely related to tomatoes and potatoes, it is poisonous and should not be eaten. The attractive blue flowers bloom in summer and fall and are followed by bright red berries. Growing up to six feet in height, it can make a good hedge.

Solanum ellipticum is native to Australia. Also related to members of the nightshade family, like eggplants, tomatoes and the edible potato, it is a small fruiting shrub. The fruit has a slightly pungent odor and is typically produced after a fire or rain. The fruits are edible both raw and cooked. This plant does better in warm climates.

Another solanum, Solanum crispum ‘Glasnevin,’ is grown in USDA Zones 8 through 11. It is hardy and evergreen, unlike edible potatoes which will die back in a hard frost. It can be grown as a free-standing shrub or trained to an espalier or trellis. The flowers are blue, with yellow centers, and appear from March to late November. Fruits are inedible.

All of these plants prefer full sun. They need regular water and in warm dry areas may need to be watered frequently to keep the soil moist. Blue potato bush and Chilean potato bush are both tall plants and need deeper soils and higher fertility than the bush tomato. Provide a thick organic mulch and twice yearly applications of a complete, balanced slow-release fertilizer.