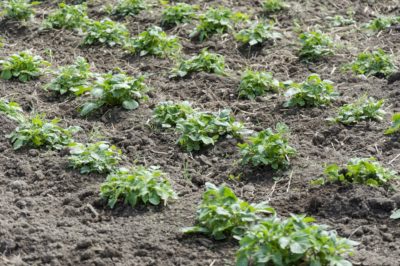 Potatoes Need Some Room To Grow

If you’re going to grow potatoes, you’ll want to be sure you allow them plenty of room in your garden. Without sufficient space to properly grow and develop, your potatoes will end up small and immature; they may not even grow at all! Here is the information you need on providing your potatoes with the necessary amount of space to be successful.

A Primer on Tubers

Tubers are plants that generally grow long, underground stems that thicken and which eventually develop into such foods as:

Because these kinds of plants spread out underground, they require a bit of room to grow well.

Potatoes can be grown in containers, boxes, tires, towers,and bags, and each of these methods has a way of providing growth space; when planting your spuds in the ground, though, there is a need to plant with plenty of space allowance so you get the best potatoes possible.

Planting your potatoes directly into the ground will usually require that you create rows in your garden. To do this, just dig shallow trenches, about three inches deep, that run the length of your planting area. Each row after the first should be about three feet from the previous one.

Your actual trenches needn’t be particularly wide, provided your seed potatoes can be planted three inches deep and completely covered with soil. Dirt from the area between rows will be used later on in the growing process, so leave plenty.

After you’ve dug your trenches and left plenty of space between rows, it’s time to plant your seed potatoes. This, too, requires that you allow for distance. Seed potatoes should be placed in their trenches, about 12 inches apart.

This will allow each plant to spread out and grow, creating new potatoes for you to harvest later. Once placed in the trenches, properly spaced and with their new shoots facing upward, cover your seed potatoes with about three inches of soil, ensuring that they are fully covered.

As the Potato Grows

In addition to spreading out underground, your potatoes will also send stems upward to emerge from the ground, which is a signal that you need to add more soil to the garden. When these new stems are about ten to 12 inches tall, you’ll want to mound soil around the new growth.

Using the soil from between your rows, cover the growing stems to about three inches from their tops. While you’re doing this, add whatever dirt might be necessary to ensure that your growing potatoes will remain fully covered and out of the sunlight.