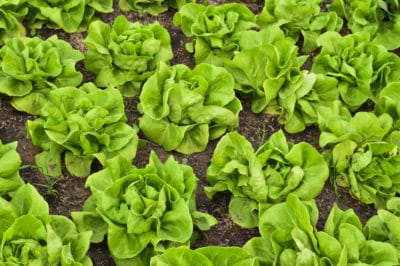 How to Harvest Buttercrunch Lettuce

Buttercrunch or Butterhead lettuce grows thick, buttery leaves that are a delight in the salad bowl or on a sandwich. You can harvest it as a ‘cut and come again’ green. Or, wait a little longer and harvest the entire head. Buttercrunch heads are a sweet and crunchy garden treat.

Harvest lettuce early in the morning. The daytime sun will dry it out and if harvested when dry it will wilt quickly. The firm, young heads taste best and store the longest. If the head is too mature, the leaves become tough and bitter. Here are three methods for harvesting buttercrunch:

Buttercrunch can be harvest as a ‘cut and come again’ green like most lettuces. This allows you to begin harvesting 21 days after planting and come back again throughout the season. To do this, simply remove the lowest leaves of the plant as they come into maturity. Leave the roots and the center where new leaves are growing intact.

Between 50 and 75 days after planting, your buttercrunch will produce a rosette head. When the plant is well hydrated, cut the base of the step with a clean knife. Remove the head with the leaves connected at the bottom, but leave as much stem in the ground as possible.

The stem in the ground will sprout and within a week or two you’ll have new lettuce leaves to harvest. It won’t head again, but you can continue to take leaves from the base until it flowers. Once a lettuce plant flowers it produces a milky, bitter compound that makes it far less palatable.

Often buttercrunch is sold in stores with its root system intact. It keeps the head crispier and full for longer since the leaves still have access to nutrients from the roots. Lettuces grown hydroponically are commonly harvested this way.

You may want to loosen the soil around the roots of the head with a spade to avoid breaking them off as you pull it from the ground. Be gentle and give it a little shake as you pull from where the stem meets the soil.

Once it’s out of the ground, rinse off the root system to avoid contamination from soil bacteria. Store it with the roots attached, and remove them when it’s time to eat the head.

Upon harvesting immediately mist the plant. Whether you’ve harvested leaves or heads, roots or no roots, give it a bit of misty moisture to discourage wilting. Store in a plastic bag with a paper towel inside to soak up excess water. Put in the refrigerator and keep for up to two weeks.