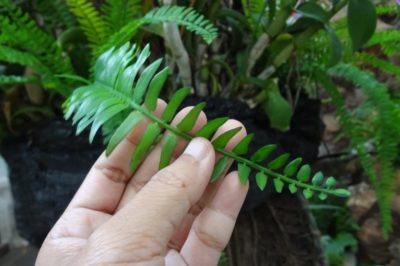 How to Fertilize a Boston Fern

The bright green fern commonly called Boston fern – Nephrolepis exaltata “Bostoniensis” – is actually a sub-tropical native of the Caribbean, Polynesia and Africa. These evergreen perennials make good houseplants and can also be grown in USDA Zones 8 through 11. They can be moved outside during the summer months in colder regions and do well in shady areas.

Boston ferns have a few definite requirements. They need bright, indirect light indoors, although they can be grown in partial or full shade outside. Moist, fertile soil that drains well is important, as they don’t like waterlogged soil. These ferns do need some fertilizer but can suffer from over-fertilization or from excess salts in the soil.

When you first buy or are given a Boston fern, it will do well in a potting mix of 60 percent peat moss and 40 percent coarse sand, perlite or vermiculite. If you are growing the plants outside, you can use good garden soil with compost or leaf mold, but amend with sand to promote drainage. Additional fertilizer is unnecessary for the first four to six months.

Boston ferns are not fast growers, and since they don’t develop flow stalks, seeds or fruit, have relatively low fertilizer needs. Apply a dilute liquid fertilizer once a month during the growing season of April to September. For timed-release fertilizer or fertilizer sticks, apply in April. Do not fertilize in the winter months, when the plant is dormant.

Like many perennial plants, Boston ferns reproduce by growing offsets. These typically consist of a couple of fronds and a root mass that hang from the sides of an established Boston fern. They can be detached from the mother plant and potted or placed in the ground. These offspring are very sensitive to excess fertilizer and should not be fed until they are well-established – usually one year old.

Excess fertilizer will kill a Boston fern. Container-grown plants are especially susceptible. The plant will develop browned or dried fronds, leaf loss and/or blackened roots. Even if you don’t over-fertilize, salts tend to build up in the soil. Flush container plants well with copious amounts of distilled water once a month during the growing season. Allow to drain completely.